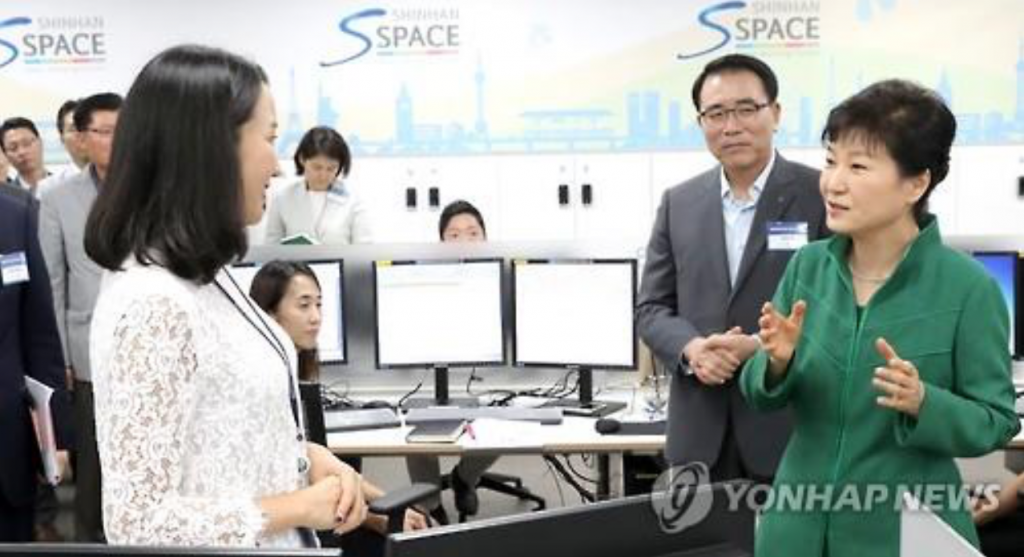 President Park Geun-hye (R) talks with an employee of Shinhan Bank during her visit to the bank’s Smart Work Center in southern Seoul on Aug. 5, 2016. (image: Yonhap)

SEOUL, Aug. 5 (Korea Bizwire) — President Park Geun-hye on Friday visited two local companies as part of her efforts to promote a flextime system, a core element of a broader program that her government has implemented to help workers maintain a work-family balance.

Park visited “Smart Work Centers” of the two firms — Shinhan Bank and Hana Tour. The firms have adopted the flextime system under which their employees flexibly decide their work schedules to spend more time with their families.

The Park administration has been carrying out a campaign for work-family balance through a multifaceted program that encourages public and private firms to introduce the flextime system or other methods, such as a work-at-home scheme. The program also includes an after-school program for elementary school children to support working mothers.

The government currently offers 400,000 won (US$345) per employee to each company that has the flextime system in place. The president has said she would consider increasing the amount to 600,000 won.

In June, Park visited Air Korea Ltd., an affiliate of South Korea’s Hanjin Group conglomerate that boasts a comprehensive program, including the flextime system. The company said that with the program, it has been able to hire more female workers, as well as seen its corporate productivity rise and its employee turnover rate fall.