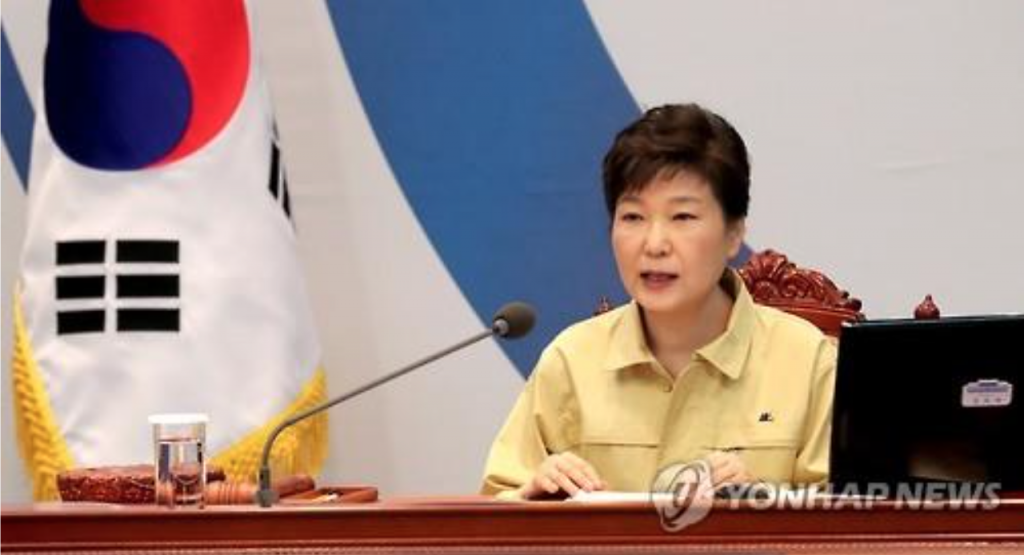 SEOUL, Aug. 22 (Korea Bizwire) – President Park Geun-hye on Monday warned of possible North Korean provocations, saying the likelihood of unrest in Pyongyang could rise amid signs of “serious cracks” in the communist regime.

During a National Security Council (NSC) session, the commander-in-chief pointed out that the recent defection of North Korean elites, including a top-level diplomat, is an indication of cracks in the North’s dictatorial governing structure.

“As the North Korean regime has been repressing its people with its continued reign of terror while ignoring the livelihoods of its citizens, even the loyalty of North Korea’s elites has begun to crumble,” Park said during the session which was held as the annual South Korea-U.S. military drills kicked off its two-week run.

“As signs of serious cracks emerge, the likelihood of unrest in the regime is increasing,” she added.

Thae Yong-ho, North Korea’s deputy ambassador to Britain, recently defected to South Korea with his family — a case that observers here say highlights that the loyalty of the North’s elites towards its leader Kim Jong-un has been eroding.

Thae, who Seoul officials say has been “disillusioned” with the repressive regime, is among many other elites who have sought asylum in South Korea or elsewhere.

Park also stressed that to prevent internal unrest and further defections by North Koreans as well as create confusion in South Korean society, the North could undertake various types of provocations or terrorist acts, including those in cyberspace.

“Given that the possibility of North Korean provocations is higher than ever before, and North Korea’s nuclear and missile threats are direct and real ones, our drills must be like real (battle operations),” Park said, referring to the Ulchi Freedom Guardian exercise, an annual war game jointly carried out by South Korean and U.S. troops across the nation.

Calling for national unity in overcoming security challenges, the president noted that Pyongyang is moving on an “extremist path” that aims to keep South Korea on edge.

“I call on Cabinet members to accurately grasp the crisis situation and sternly respond to acts that foment internal division and conflict,” she said during the Cabinet meeting.

Park, in addition, underscored that based on a robust defense posture, the South should make the North “clearly realize that it would self-destruct should it refuse to change tack” and move towards denuclearization.

Meanwhile, experts here were divided over the question of whether the recent defection of North Korean elites indicates any weakening of the dictatorial ruler’s control over the top echelons in the reclusive state.

Some argued that Thae’s defection to the South bodes ill for the future of the North’s autocratic regime. Others, however, said it is premature to raise the possibility of any unrest in the North’s tightly-controlled society.

“Even though it (Thae’s defection) would not portend the demise of the North Korean regime, it clearly presages a division in the regime,” said Kim Yeoul-soo, an international politics professor at Sungshin Women’s University.

Chang Yong-seok, a senior researcher at the Institute for Peace and Unification Studies affiliated with Seoul National University, said that the North’s internal situation still makes it difficult for the elites to do anything collectively to hurt the regime, although overseas North Koreans may more easily opt to defect and seek a new life elsewhere.

“We may be able to raise the possibility of cracks or divisions in the North’s regime when the elites living there consider seeking asylum in foreign countries as realistic options,” he said.

Defectors and observers said that while fissures may start appearing in the reclusive country, collective action such as staging a coup or a popular uprising is not likely given that state minders covertly operate in every nook and corner of the country to stamp out any signs of rebellion.