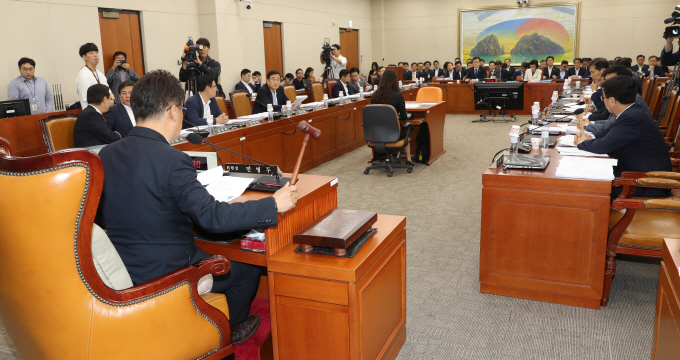 The NPC agreed that family-owned conglomerates, known as chaebol, will not be allowed to boost their stakes in Web-only banks in principle, a move aimed at preventing them from using such lenders as private coffers. (image: Yonhap)

SEOUL, Sept. 19 (Korea Bizwire) — A parliamentary committee on Wednesday approved a bill aimed at allowing nonfinancial firms to have up to a 34 percent stake in Internet-only banks, easing the current 4 percent ownership limit for financial industry reform.

The National Policy Committee agreed that family-owned conglomerates, known as chaebol, will not be allowed to boost their stakes in Web-only banks in principle, a move aimed at preventing them from using such lenders as private coffers.

But as an exception, companies whose information and communication technology (ICT) assets account for more than 50 percent of their total assets will be subject to the Internet banking deregulation.

Internet-only banks will be also banned from extending corporate loans other than lending to smaller firms, it said.

The bill will be put up for a vote at a parliamentary plenary session slated for Thursday.

“The bill, if passed, will serve as a starting point for innovative growth,” Hong Young-pyo, the floor leader of the ruling Democratic Party (DP), said on his Facebook account.

“We’ve come up with a bill that will firmly prevent conglomerates from making Internet-only banks their private coffers,” he said, expressing hope that the deregulation will help promote innovative growth and spur economic vitality.

Rival parties were at loggerheads over how much the ownership cap should be eased or whether chaebol should be allowed to benefit from the Internet bank deregulation.

The current banking law restricts nonfinancial firms’ ownership to block family-owned conglomerates from gaining control of lenders on concerns that they could easily get credit for their expansions.

Two Internet-only banks — K-Bank and Kakao Bank — were launched last year, but they have faced difficulty in achieving sustainable growth as their two biggest shareholders, KT and Kakao, are unable to issue shares to increase the banks’ capital.