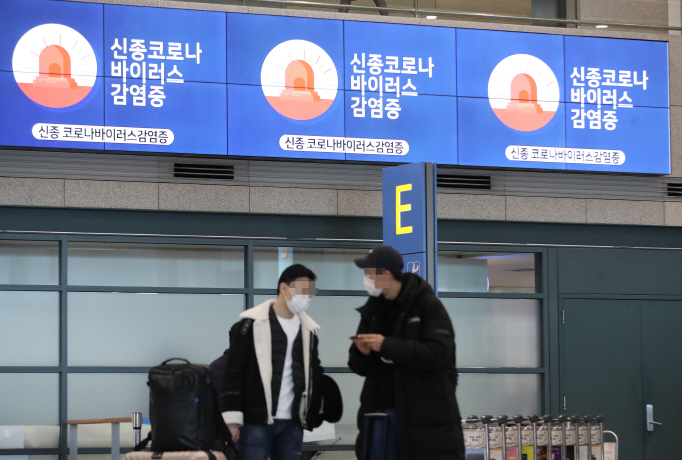 A monitor at Incheon International Airport, west of Seoul, displays information on ways to fight new coronavirus on Feb. 3, 2020. (Yonhap)

SEOUL/YEONGJONGDO, Feb. 4 (Korea Bizwire) — With the entry ban taking effect Tuesday against non-Korean travelers coming from or through China’s Hubei Province, tensions are running high at Incheon International Airport, the gateway to Seoul, where an army of hundreds of customs and health officials are mobilized at the airport’s three “China-only” arrival counters to detect passengers with suspected symptoms of the new coronavirus.

The unprecedented entry ban, announced Sunday by the South Korean government, applies to all foreign travelers who over the past 14 days have stayed in or traveled to the central Chinese province, the home to Wuhan, where the novel coronavirus is believed to have originated late last year.

Tension at the airport, located in Incheon’s Yeongjongdo district, spiked at around 40 minutes past midnight Monday, when Korean Air Flight 854 landed there from Beijing and arrived at Gate 232 of Terminal 2.

It was the first plane arriving from China after the entry ban for non-Korean visitors to Hubei province went into effect.

All the passengers from Beijing were herded to one of the airport’s three China-only quarantine inspection areas that opened the previous day to separate passengers flying in from China from arrivals from non-Chinese airports.

Terminal 2′s China-only quarantine desk was manned by a large number of officers from the Incheon Airport National Quarantine Station and about 50 officials dispatched by the Ministry of Health and Welfare.

The passengers were first asked to fill out health questionnaires to check whether they had fever or respiratory symptoms.

Foreigners, in particular, were required to write a special quarantine report, providing their mobile numbers and domestic stay addresses and disclosing any visit to Hubei province in the past two weeks. 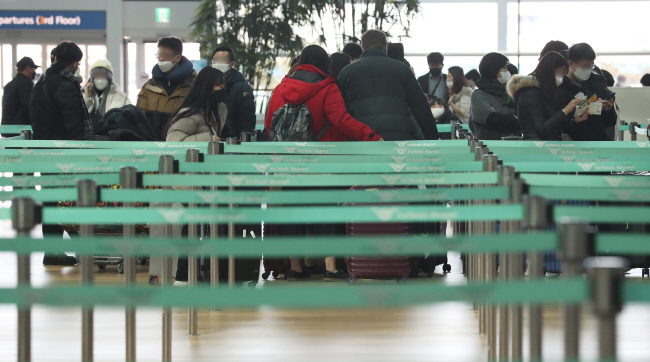 Passengers then moved in front of the quarantine officers, who used thermometers to examine them for fever and respiratory symptoms. Anybody found with symptoms was immediately isolated for treatment.

Passengers who passed through the quarantine check without any symptoms were asked to confirm their domestic contact details.

A group of 24 officials actually called the mobile numbers submitted by passengers.

Passengers whose phone numbers were verified were issued a quarantine certificate. The certificate had to be submitted during the next stage of immigration. Without a certificate, immigration was to be denied.

If a stay in or visit to Hubei was confirmed, entry was to be banned for the concerned passenger.

She said such procedures are necessary to help stop the spread of the viral disease.

Airport officials said all 100-odd passengers arriving from Beijing aboard Korean Air Flight 854 passed through the lengthy quarantine and immigration procedures without reporting any trouble.

Despite the enforcement of such meticulous quarantine procedures, however, some critics and officials say there could be some loopholes in detecting everyone infected with the coronavirus.

“It is not easy to detect infection during its latent period with the current medical technology. Thus we’re securing contact numbers of all passengers to respond effectively if asymptomatic carriers pass through airport quarantine screening and spread the disease in society,” said an official. 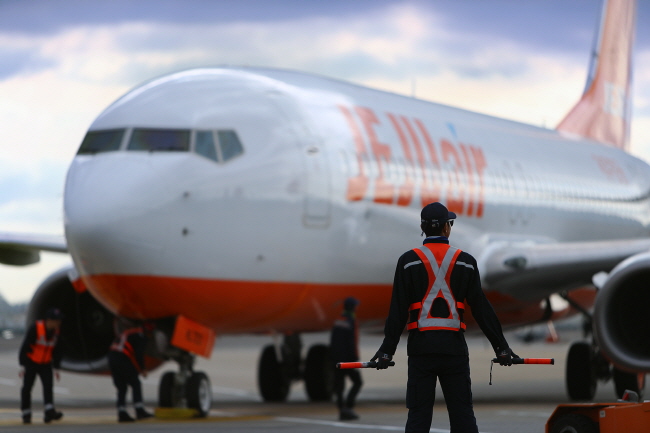 According to the Central Disaster and Safety Countermeasures Headquarters, a dozen more international flights from China touched down in South Korea by 4 p.m. Tuesday, but not a single passenger was denied entry.

A total of 118 direct flights between China and South Korea are planned for Tuesday.

“The entry of only one passenger was delayed briefly due to the absence of the person’s contact number. After a SIM card from a local mobile carrier was delivered and the necessary contact number secured, the person was allowed to enter the country,” said Kim Gang-lip, deputy head of the central disaster headquarters, in a media briefing.

If a foreigner is found to have made a false statement after entering the country, he or she will be forced to leave the country and reentry will also be prohibited.

Among Chinese passengers, holders of a passport issued in Hubei province are denied entry into South Korea regardless of the place of departure.

In addition, the existing visas issued by the South Korean Consulate General in Wuhan will be temporarily suspended.

To help avoid confusion, all passengers are offered prior notice on Seoul’s toughened immigration procedures before checking into flights bound for South Korea.

The Incheon airport installed 84 telephones at the China-only quarantine areas for the purpose of verifying all passengers’ phone numbers.

Besides the health ministry, the Ministry of National Defense sent 90 personnel to the airport to assist in the quarantine efforts.

Nationwide, 217 defense ministry personnel, including 40 interpreters, were deployed to airports and seaports.

At Gimhae International Airport, the gateway to Busan, the nation’s second-largest city on the southern coast, customs and quarantine officials also remained on maximum alert throughout the morning, though the number of passengers was far smaller than usual.

Airport restaurants were nearly empty, while almost all people inside the terminal were wearing face masks.

The Busan branch of Korea Airports Corp. said a total of three flights were scheduled to arrive at the Gimhae airport from China, beginning with Asiana Airlines Flight OZ346 from Shenyang at 1:40 p.m. and two more jets from Qingdao at 3:25 p.m. and Shanghai at 4:50 p.m.

The branch said the three flights from China will carry 408 passengers to Gimhae in the day.

Prior to the outbreak of the coronavirus, an average of 10 flights arrived at Gimhae from China per day, transporting about 1,800 passengers.

Like the Incheon airport, the Gimhae airport will thoroughly separate the arrival and quarantine areas for passengers coming from China and force them to undergo checks for fever and respiratory symptoms, and verification of their domestic contact numbers.

On Jeju Island, the southern resort island, a visa-free entry program for Chinese visitors was temporarily suspended from Tuesday, as parts of the government’s efforts to stem the spread of coronavirus infection.

Chinese tourists can hardly be seen at both departure and arrival halls of Jeju International Airport, due largely to the suspension of the visa-free program.

Only four passengers were on board an aircraft that arrived at the Jeju airport from Shanghai at 9:40 a.m.

The four passengers were allowed entry only after undergoing all the necessary quarantine and immigration procedures.

Hit by the coronavirus crisis and the Chinese government’s ban on overseas group tours, the number of direct flights between Jeju and China is expected to decrease from 149 per week to 28 by the end of next month, according to airport officials.

The suspension of the visa-free program for Chinese visitors, as well as the reduced number of direct flights with China, is likely to further batter Jeju’s tourism sector.

The number of arrivals in South Korea from China dived to 11,381 on Monday from a daily average of over 30,000 early this month, government data showed.

Monday’s arrivals included 3,090 South Korean nationals, with the other 8,291 being foreigners.

Officials analyzed that the number of South Korean travelers to China has significantly decreased, while Chinese nationals have increasingly refrained from entering South Korea for business or sightseeing purposes.

Meanwhile, the Seoul government has still shown a careful attitude towards elevating its infectious disease alert level by one notch to the highest Level 4.

Instead, the government has been managing the situation under a Level 4-like manual through the Central Disaster and Safety Countermeasures Headquarters under the supervision of the prime minister, officials explained.