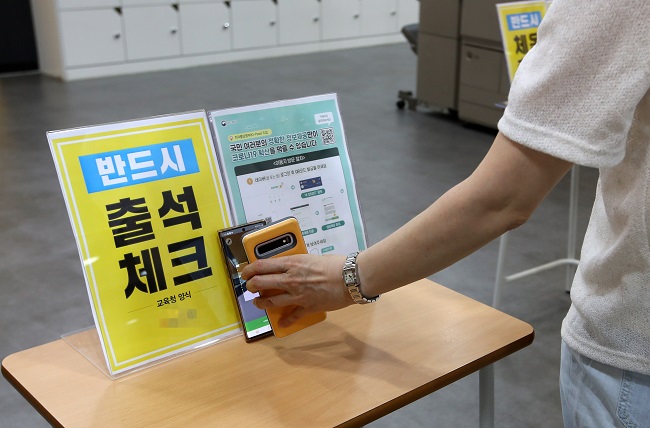 This file photo shows a student using his smartphone to scan a QR code before entering a hagwon. (Yonhap)

SEOUL, Aug. 3 (Korea Bizwire) — About 4,000 cram schools, called hagwon in Korean, across the country have installed a quick response (QR) code-based entry authentication system to help curb the spread of the new coronavirus, the Ministry of Education said Monday.

In the Seoul metropolitan area, where QR code-based entry logs are mandatory for private educational facilities, all 3,382 hagwon have already introduced the digital registration system, the ministry said.

Outside the capital area, there were 64 hagwon mandated to have the QR code-based entry management system, and all of them have completed the mission, it noted.

An additional 670 hagwon outside the capital area have introduced the smartphone-based entry log system, though it is not compulsory for them, the ministry added.

In June, the ministry announced a plan to introduce the QR-code system for all large-scale cram schools with more than 300 enrolled students, giving a grace period until July 14.

“Senior citizens and middle and high school students who do not possess a smartphone may have difficulties using the QR-code registration system, but hagwon, in general, agree on the need to install such an electronic entry log system,” a ministry official said.