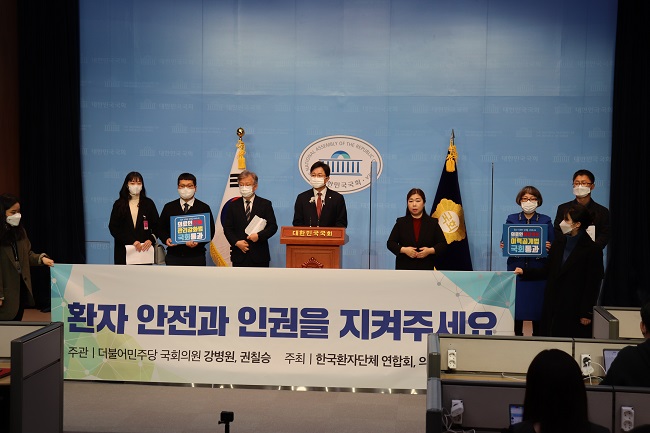 Activists hold a news conference at the National Assembly in Seoul on Nov. 6, 2020, to call for the installation of surveillance cameras in hospital operating rooms, in this photo provided by the Korea Alliance of Patients Organization.

Activists from patient groups, bereaved families of medical malpractice victims and two lawmakers from the ruling Democratic Party held a joint news conference at the Assembly to step up calls for revising the current medical laws to oblige all local hospitals to furnish their operating rooms with closed-circuit television (CCTV) cameras.

Compulsory installation of surveillance cameras in hospital operating rooms has long been a hot button issue in local medical circles.

Activists insist CCTV cameras are necessary because the current law places the burden of proving operating room mistakes on patients, while the Korean Medical Association argues that video recording in operating rooms violates doctors’ practice and human rights as well as the privacy of patients and nurses.

“About 20 proposed revisions of medical laws aimed at protecting the safety and human rights of patients were submitted to the previous 20th National Assembly. But all of them were scrapped with the expiry of its term in the face of objections from medical circles,” the activists said during the news conference.

“Many medical malpractice cases, including the substitution of doctors by unqualified people, such as nurses and drug salespeople, and sexual offenses have occurred from operating rooms of local hospitals. The public now wants mandatory installation of CCTV cameras there to safeguard the safety and human rights of patients,” they asserted.

Reps. Kwon Chil-seung and Kang Byung-won of the same party have also submitted a separate revision bill on banning doctors convicted of violent crimes from practicing medicine and increasing penalties to strengthen supervision over doctors’ licenses.