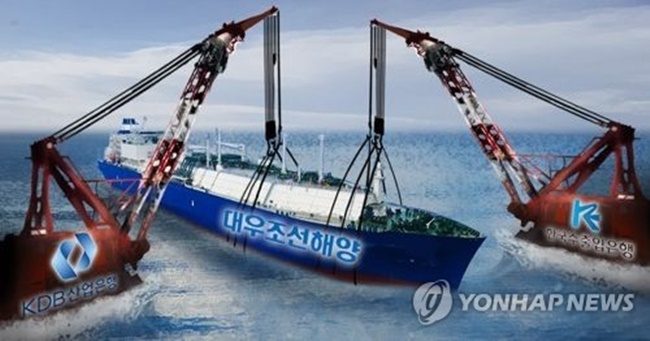 Late last month, state-run creditor banks announced a fresh rescue package worth 6.7 trillion won for Daewoo Shipbuilding, but only if all stakeholders agree to a debt-for-equity swap plan. (Image: Yonhap)

The National Pension Service (NPS), which holds about 30 percent of bonds sold by Daewoo Shipbuilding, made the remarks when announcing the outcome of the Wednesday meeting on the troubled shipbuilder.

Citing “doubts over the financial situation” at Daewoo Shipbuilding, the NPS said in a statement that it made no decision on whether to accept the debt rescheduling measures.

NPS officials said the fund will make a decision by the end of next week.’

Unless the NPS accepts a debt-for-equity swap and other debt rescheduling measures, analysts say a rescue package for Daewoo Shipbuilding may not succeed.

Late last month, state-run creditor banks announced a fresh rescue package worth 6.7 trillion won for Daewoo Shipbuilding, but only if all stakeholders agree to a debt-for-equity swap plan.

Under the rescue package, Daewoo Shipbuilding will receive new loans worth 2.9 trillion won if lenders and bondholders agree to swap 2.9 trillion won of debt for new shares in the shipbuilder.

Bondholders are also required to give a three-year grace period to the repayment of the remaining debt.

Meanwhile, the labor union of Daewoo Shipbuilding on Thursday agreed that its unionized workers will return an additional 10 percent of their salaries to the company until its business returns to normal.

Daewoo Shipbuilding and the union also agreed to halt labor negotiations, as part of their self-rescue package.

In a statement, Daewoo Shipbuilding CEO Jung Sung-leep said he will spare no efforts to normalize the company, while thanking employees for joining the “pain-sharing” measures.