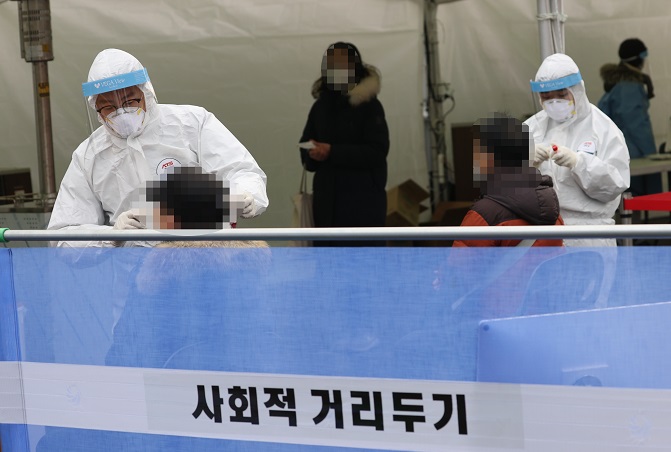 Medical workers collect specimens from people for COVID-19 tests at a temporary screening facility in front of Seoul Station on Dec. 18, 2020. (Yonhap)

SEOUL, Feb. 23 (Korea Bizwire) — A South Korean panel of experts said Tuesday that vaccines for the novel coronavirus by U.S. pharmaceutical company Pfizer Inc. showed a more than 95 percent efficacy rate, and the use of the vaccine is not problematic for young people.

The advisory board consisting of outside experts announced its review on the efficacy and safety of the Pfizer vaccines, according to the Ministry of Food and Drug Safety.

The panel’s review is the first step of three separate independent evaluations before the ministry gives the final approval.

The panel advised the ministry to approve Pfizer’s two full-dose regimen, saying it showed efficacy on all adults, including those aged between 16 and 17, and elders aged 65 and older.

The data showed that the vaccine demonstrated 95 percent efficacy in preventing COVID-19 in those without prior infection seven days or more after the second dose.

The panel said severe reactions were reported in less than 0.6 percent of vaccine recipients, but the rate was within the tolerable rate.

Pfizer’s vaccine is provided under the World Health Organization’s global vaccine COVAX Facility project, and the shots will first be given at five state-run vaccination facilities as the products require ultra-cold chain storage.

The authorities plan to further build 120 such facilities at general hospitals, gymnasiums and other kinds of government sites.