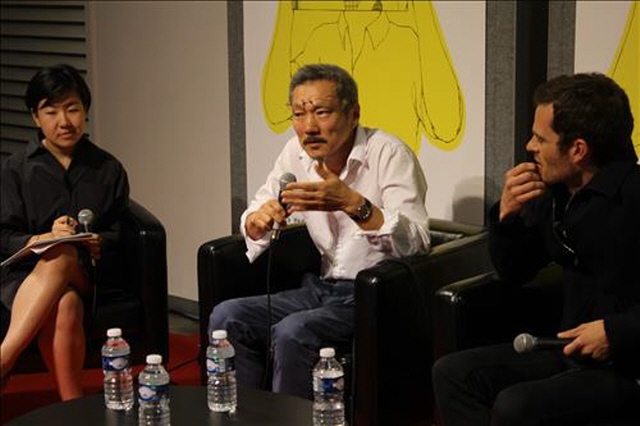 The 21st feature from Hong, about a married man’s infidelity drama, got four minutes of standing ovation at its premiere at the 70th edition of the festival. Director Hong, and main actors Kwon Hae-hyo and Kim Min-hee, responded to the cheers from the audience with emotional looks.

Kwon plays Bong-wan, a well-known author and publisher, who is cheating on his wife with his assistant Chang-sook (Kim Sae-byeok). His wife finds out what is going on, but it is only after he breaks up with his mistress that she visits his office and slaps the cheek of an innocent, just-hired new assistant Ah-reum (Kim Min-hee), mistaking her as the mistress.

Ah-reum says she wants to quit the job after just one day, and Bong-wan tries to dissuade her. But things get complicated when Chang-sook comes back to the office and says she wants to work with him again. He then plots to sack the new employee and rehire his ex-lover.

The film was shot for three weeks in South Korea in February in black and white, the first time after his previous titles “Virgin Stripped Bare By Her Bachelors” (2000) and “The Day He Arrives” (2011). Kwon’s wife in real life, stage actor Cho Yoon-hee, played the role of Bong-wan’s wife.

After the movie’s press screening, Hubert Niogret, France’s leading film critic and editor of the leading French film magazine Positive, praised the film as being “fantastic” and “the best of the titles that have so far been unveiled in this year’s Cannes competition.”

Jeon Chan-il, a Korean film critic, said, “I was able to see the cinematic style that led France in the 1960s in this film.” However, the attempt to reach the audience with its uncomplicated structure was impressive, He said.

As the film received favorable reviews, it is drawing attention to whether Hong’s fourth foray into the Cannes after “Woman Is The Future Of Man” (2004) and “Tale of Cinema” (2005) and “In Another Country” (2012) will be honored.’