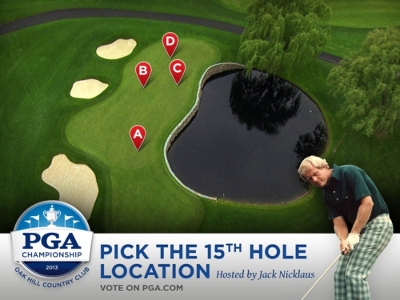 PGA.com Fan Voting to Determine Specific Location of Hole No. 15 During 95th PGA Championship Final Round

PALM BEACH GARDENS, Fla., July 23, 2013 (Korea Bizwire) – For the first time ever, golf fans worldwide will be able to have a direct impact on the hole location of a major championship, through the newly created “PGA Championship Pick the Hole Location Challenge Hosted by Jack Nicklaus.” The Challenge will be conducted in conjunction with the 95th PGA Championship, the Season’s Final Major, at Oak Hill Country Club in Rochester, N.Y., Aug. 5-11.

A collaborative learning experience between The PGA of America and record-tying, five-time PGA Champion Jack Nicklaus, the “PGA Championship Pick the Hole Location Challenge” is designed to educate fans on how course setup impacts a golfer’s strategy in playing a hole; attract more people to the game; and help explain what hole location information players are provided each day.

As a result, fans are encouraged to visit PGA.com from July 23-Aug. 10, in order to vote for one of four exciting and challenging final-round hole locations for the par-3, 181-yard 15th hole at Oak Hill. Nicklaus, whose final PGA Championship victory occurred at Oak Hill in 1980, collaborated with PGA Chief Championships Officer Kerry Haigh to select the picturesque 15th hole due to the impact it will likely have on the PGA Championship’s outcome. As a result, Haigh has identified and selected each of these four distinct Championship hole locations for fans to vote. On August 11, during Sunday’s final round coverage on TNT and CBS, fans will be able to see the winning hole position that will be used on the 15th green.

“The opportunity for fans to take part in the interactive ‘PGA Championship Pick the Hole Location Challenge’ is part of a new era in engagement that connects golf fans with the Season’s Final Major in a fun and dramatic way,” said PGA President Ted Bishop. “The PGA of America is delighted to present this innovative opportunity, as we believe this is the first time that consumers have been able to make a direct and significant impact on a global sports arena. We are honored that the legendary Jack Nicklaus will lead fans as their host and teacher in understanding the nuances that the greatest players in golf consider and think about regarding course setup and hole locations – and the effect their selection will have on the eventual outcome of the 95th PGA Championship.”

PGA.com, the Official Website of The PGA of America which is managed by Turner Sports, will also offer video vignettes from Nicklaus that will educate golfers on how course setup impacts a golfer’s strategy in playing a hole.  Fans are also encouraged to follow the conversation via #pgachamp #YouPick.

“The chance for golf fans to interact with the PGA Championship and play a role in shaping the outcome of the final round fascinates me,” Nicklaus said. “It’s like being able to call the shots during the fourth quarter of the Super Bowl. In addition to playing a key role in the outcome of the Championship, golf fans can learn many aspects of on-course strategy, as The PGA of America and I present educational videos to enhance their golf experience. I believe this new concept will serve as an exciting hands-on learning experience for golf fans and I’m happy to be involved.”

Haigh, who has set up PGA Championship, Ryder Cup, Senior PGA Championship presented by KitchenAid, and PGA Grand Slam of Golf courses since 1989, is excited about the possibilities of the Challenge. “Now, golf fans will experience what is involved with the selection of hole locations, as well as the dramatic effect that this placement has on the game plans of the world’s best players. Accordingly, golf enthusiasts can then turn to the legendary Jack Nicklaus for his exclusive insight on golf course management.”

A sweepstakes will also be held on PGA.com in conjunction with the “PGA Championship Pick the Hole Location Challenge,” with entrants having an opportunity to win a behind-the-scenes experience for two during the 2014 PGA Championship at Nicklaus-designed Valhalla Golf Club in Louisville, Ky.

The PGA Championship perennially features the strongest field in golf and is one of the most prestigious sporting events in the world. Since 1916, golf’s best professionals have been competing for the PGA Championship’s coveted Wanamaker Trophy, with a list of champions that includes: Rory McIlroy, Tiger Woods, Phil Mickelson, Ben Hogan, Sam Snead, Gene Sarazen, Walter Hagen and Nicklaus.

About The PGA of America Since its founding in 1916, The PGA of America has maintained a twofold mission: to establish and elevate the standards of the profession and to grow interest and participation in the game of golf. By establishing and elevating the standards of the golf profession through world-class education, career services, marketing and research programs, The PGA enables its professionals to maximize their performance in their respective career paths and showcases them as experts in the game and in the multi-billion dollar golf industry. By creating and delivering world-class championships and innovative programs, The PGA of America elevates the public’s interest in the game, the desire to play more golf, and ensures accessibility to the game for everyone, everywhere. As The PGA nears its centennial, the PGA brand represents the very best in golf.

About PGA.com PGA.com is the official online destination for The PGA of America and is home to the PGA Championship, the Senior PGA Championship, The PGA Grand Slam of Golf and The Ryder Cup. Beginning in 2002, Turner Sports and the PGA formed a multi-year alliance with a mission to serve the golfing public, PGA Professionals and the golf industry with products and services to grow the game of golf.  The two organizations recently expanded the deal through 2019 to include licensing with Turner’s Cartoon Network Enterprises (CNE) serving as the PGA’s licensing agent in the youth marketplace.

SOURCE:  The PGA of America (Press Release via PR Newswire)