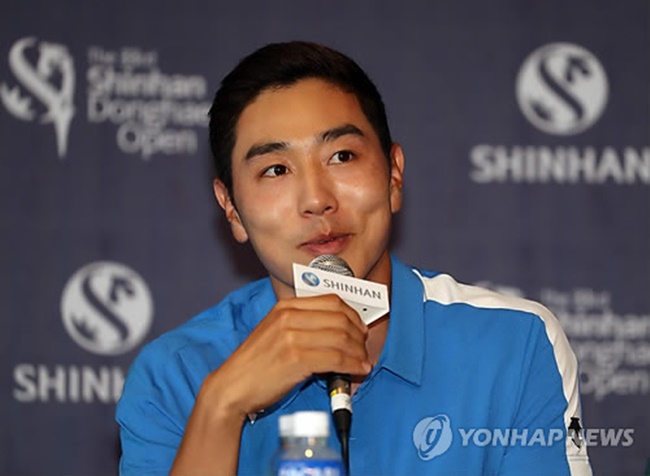 INCHEON, Sept. 13 (Korea Bizwire) – Two-time PGA Tour winner Bae Sang-moon said Wednesday he is curious about how he will perform after a two-year hiatus from golf.

Bae was discharged last month after completing his 21-month mandatory military service. The 31-year-old will make his return to competitive golf at the Shinhan Donghae Open on the Korean Tour, which starts Thursday.

“It would be a lie to say that my military service has had no impact on my golf,” Bae said during a press conference at Bear’s Best Cheongna Golf Club in Incheon. “I’m curious about my performance in this tournament, too.”

After his discharge, Bae said he had been focusing on training and improving his fitness to prepare for the tournament.

“I think I can have a good game if I can do well, like I did in practice,” he said. “Whether I can stay near the top of the leader board or not, I want to play a competitive game during the next four days.”

Bae, who won the BP Byron Nelson Championship in 2013 and Frys.com Open in 2014, plans to make his PGA Tour return next month at the start of the 2017-2018 season. Bae will return with full status for the next season after the PGA Tour granted him an eligibility extension.

“I want to thank the PGA Tour for allowing me to retain my membership and I feel fortunate for its consideration,” he said. “If I’d had no exemption, I would have to enter the Web.com Tour. But since I don’t have to, I feel more comfortable and can play the tournament with confidence.”

Bae began his military service — mandatory for healthy South Korean men between ages 18 and 35 — in November 2015 amid much controversy. Earlier that year, Bae lost a legal battle against the local military manpower agency over the extension of his overseas travel permit. Bae wanted to extend his visa, which had expired at the end of 2014, so that he could continue playing in the United States.

Although Bae had a green card, the South Korean government rejected his request for an extension on the grounds that he’d spent too much time in the country to be considered a foreign resident.

“I thought only about getting discharged when I was in military,” he said. “If I think about my time in the military, I think I can do well.”

Bae, who served as a rifleman in an Army infantry unit, however, said his time in the armed forces was valuable, and it will help his golf career.

“In my 20-year golf career, there were good times and bad times,” he said. “I think I became mentally strong because I don’t have complex things in my head. This will lead me to achieve good results.”