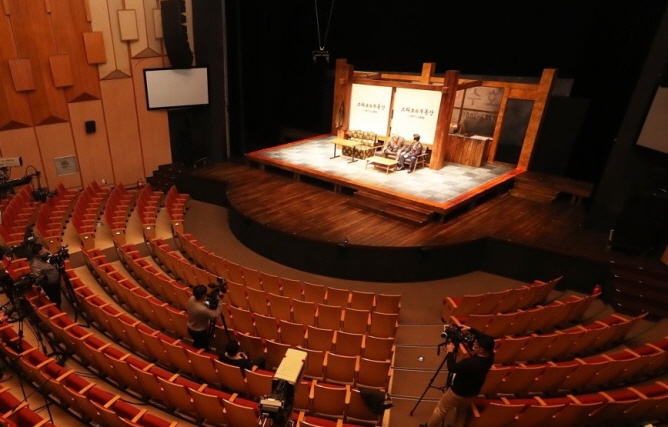 The musical “Bravo Um CEO” performs rehearsal without an audience is aired live online from a theater in Suwon, south of Seoul, on March 11, 2020, amid the spread of the new coronavirus. (Yonhap)

SEOUL, April 3 (Korea Bizwire) — Already hit hard by the coronavirus outbreak, the performing arts sector is facing a serious setback after a cast member in the musical “The Phantom of the Opera” tested positive for coronavirus.

The Korean Performing Arts Box Office Information System reported March sales of 9.1 billion won (US$7.4 million) in the performing arts industry, which represents a 75 percent drop compared to January sales and less than half of sales in February.

Among them, musical sales accounted for as much as 88.6 percent, which is why the confirmed coronavirus case for one of the cast members in “The Phantom of the Opera” is seen as a critical blow to the entire industry.

For now, a world-famous musical has been placed under a temporary shutdown until April 14.

Based on current statistics, performing arts sales in April are expected to halve again compared to sales in March.

The situation in Daehangno area in central Seoul, South Korea’s mecca of performing arts, is turning desperate as most performances are being cancelled or postponed.

When shows are performed, the theater must be thoroughly disinfected procedures and hand sanitizer made available to all spectators, who also need to fill out questionnaires as required by the government and local regulations.

The news of confirmed COVID-19 case among members of the cast, however, has darkened the outlook for theaters.

“We did not expect that a coronavirus infection by one of the actors would lead a large-scale musical to shut down altogether,” a source familiar with the performing arts industry said.

“We will have to keep an eye out since actors and staff can participate in different performances and exchanges.”

“We are deeply concerned by the current situation since it is hard to know what the future holds,” a production company official said.

“For small producers like us, however, performance is a question of survival, and it is very hard for us to make clear-cut decisions.”