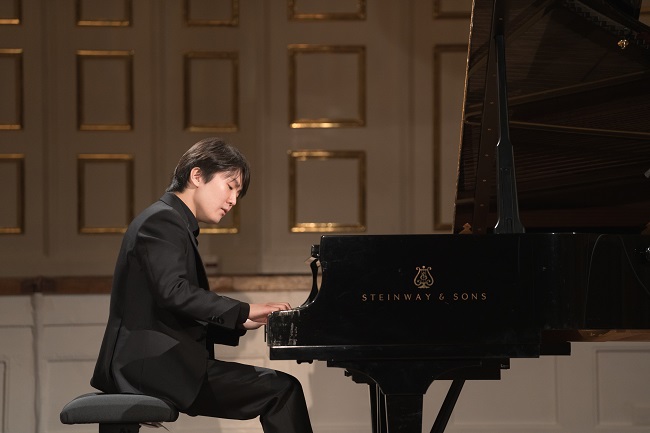 SEOUL, Jan. 29 (Korea Bizwire) — South Korean pianist Cho Seong-jin has premiered one of Mozart’s previously unheard compositions in Salzburg, Austria, after it was created 248 years ago.

In a pre-recorded performance streamed online for paid viewers Wednesday, Cho, one of the most sought-after artists in the world, played Mozart’s Allegro in D major K626b/16 as part of the digital Mozart Week 2021 at the Great Hall of the Salzburg Mozarteum Foundation, according to Universal Music.

The 94-second unfinished composition, known to be written in 1773, when Mozart was 17 years old, was inherited by his youngest son after his death and had been owned by several collectors.

In 2018, it was discovered by the Mozart foundation, which recently verified that the unattributed piano piece was composed by Mozart.

“What a joy to share with all of you this extraordinary moment! 94 seconds of new Mozart,” Rolando Villazon, artistic director of the Mozart Week, said in an introductory YouTube video released the following day by German classical music record label Deutsche Grammophon.

“And we have the great and the wonderful luck to have them by the great pianist Seong-jin Cho,” he added.

Cho played a delightful and airy melody that continues throughout the 94 seconds of the new Mozart piece, with softer and more tender tunes in the middle.

“What I like the most about his music is his storytelling. And I can also feel some operatic moments even in his piano repertoire,” Cho said in the video. “I always enjoyed playing Mozart since when I was a child.”

Cho, the winner of the International Chopin Piano Competition in 2015, is releasing a single album of the new Mozart work under the name of Deutsche Grammophon on Friday.