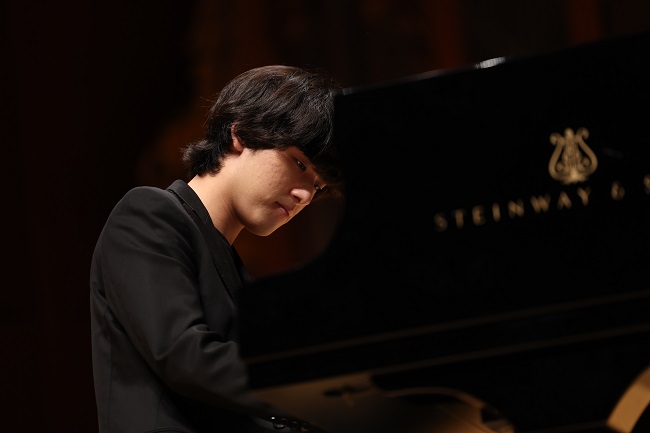 Pianist Lim Yunchan plays the piano during a press conference in Seoul on June 30, 2022, to mark his win in the 2022 Van Cliburn International Piano Competition that closed in Fort Worth, Texas, on June 18. (Yonhap)

SEOUL, June 30 (Korea Bizwire) — Pianist Lim Yunchan said Thursday nothing has changed since his recent win in a prestigious international piano competition in the United States and he will practice more to improve his skills.

“Nothing has changed,” Lim said during a press conference at his school in southern Seoul to mark his win. “Winning a competition does not lead to improved skills, so I’ll try to practice more.”

The 18-year-old student of the Korea National University of Arts clinched the gold in the finals of the 2022 Van Cliburn International Piano Competition that closed in Fort Worth, Texas, on June 18, becoming the youngest-ever winner of the 60-year-old contest.

The press conference at a music hall at the Seocho campus of the Korea National University of Arts (K-Arts) began with his performance of Russian composer Alexander Scriabin’s piano prelude No. 4, op. 37, and piano sonata No. 2.

Clad in a black jacket over a black round neck T-shirt, the piano prodigy calmly but sometimes passionately banged on the keys just as he did in the last Van Cliburn competition.

His historic win reignited a boom of classical piano music that blew up in the country after pianist Cho Seong-jin’s win in the International Chopin Piano Competition in 2015.

A video clip of Lim playing Rachmaninov’s Piano Concerto No. 3 in D Minor during the competition garnered 3.5 million views on YouTube in just 10 days of its release.

Asked if he saw the video, Lim answered negatively with a sheepish smile. 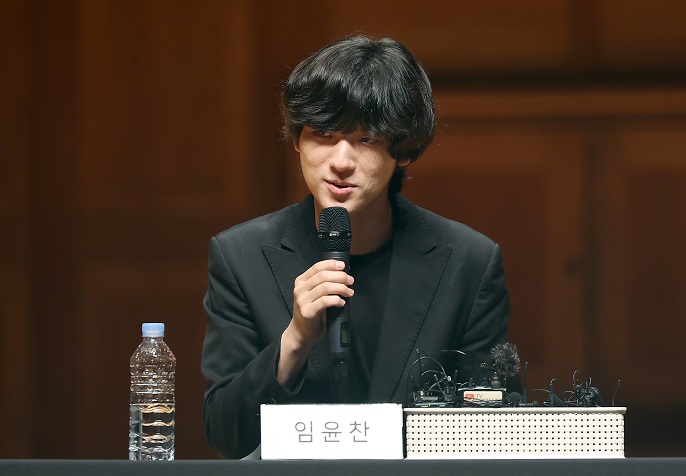 Pianist Lim Yunchan speaks during a press conference in Seoul on June 30, 2022, to mark his win in the 2022 Van Cliburn International Piano Competition that closed in Fort Worth, Texas, on June 18. (Yonhap)

Sohn, who is also a pianist, has been teaching Lim since he was 12. But he admitted he did not expect Lim would become such a great player when he first met him at that time.

“Whenever I see pieces that he brings to me (to learn), I feel that he is a person who devotes himself only to music without any other thoughts,” Sohn said.

“It is surprising the true freedom and power of music shown by Lim was achieved through self-discipline and moderation in a small practice room. I can’t wait to see what kind of music the young pianist will show as he experiences the ups and downs of his life in the future.”

Lim publicly stated his respect and confidence in Sohn, saying his mentor was an influence all over his life, not just music.

“He didn’t just talk about the piano during his lesson but also told me how to live and how old artists lived. My teacher has influenced everything in my life,” he said.

In South Korea, he will hold a piano recital at the Seoul Arts Center in southern Seoul on Dec. 10, to celebrate his Van Cliburn win.