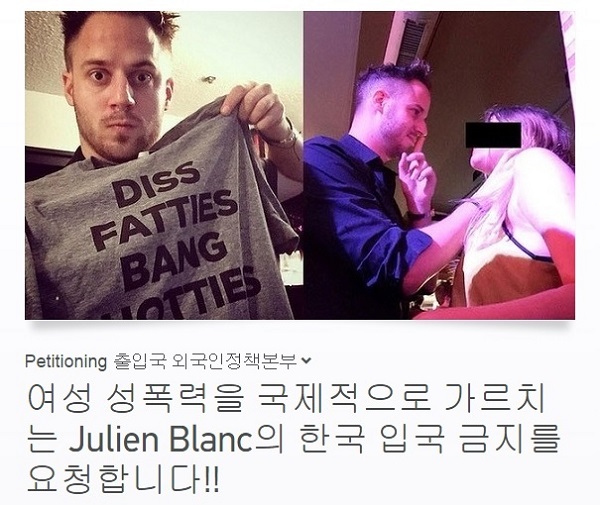 SEOUL, Nov. 18 (Korea Bizwire) – A “pickup artist” from the United States who was supposed to visit South Korea to give seminars cancelled his schedule as petitions against his entry have risen.

Pickup artist Julien Blanc who has given abusive pickup technique lectures about how to harass, dehumanize and violate women was originally scheduled to come to Korea from December 4 to 6. However, six human rights advocacy groups including Disruptive Voices have called for the Korea Immigration Service to ban the sexist from entering Korea. As of November 16, more than 69,000 Korean people have signed a Change.org petition requesting him to be denied his entry.

South Korea isn’t the only country that wants to refuse his entry. In Australia, he was expelled only in a day of entry following widespread protests. Japanese citizens and advocacy groups also protested his visit to Japan, resulting in his schedule cancelled. In the United Kingdom where he was supposed to visit in April next year, more than 110,000 people have already signed a petition on Change.org asking for Blanc to be refused his entry.

The pickup artist has worldwide been criticized over his seminars in which he has taught men how to attract women in sexist and racist ways. He once said in a lecture, “At least in Tokyo, if you’re a white male, you can do what you want.”

A pickup artist refers to a person who intentionally finds, attracts and seduces sex partners who are usually women. They teach their dating techniques to men who have never or rarely dated a woman.

Some Korean pickup artists have caused quite a lot of stirs and problems. A Korean pickup artist was prosecuted without detention on April 29 this year for posting photos of naked women whom he has met on his website in order to gather more students. The perpetrator has earned money from 50,000 won to 2 million won per lecture.