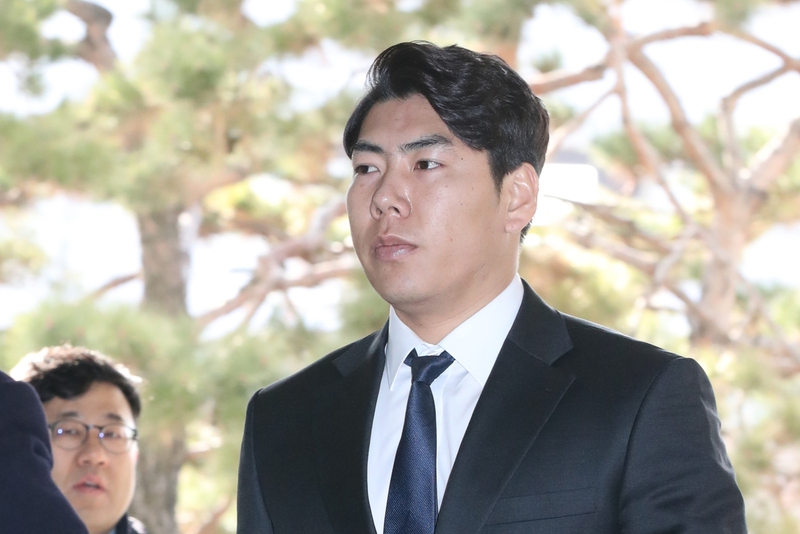 SEOUL, May 19 (Korea Bizwire) — Beleaguered major league infielder Kang Jung-ho on Thursday lost his appeal of an earlier drunk driving sentence, a development that puts his playing career in jeopardy.

The Seoul Central District Court rejected Kang’s appeal and upheld an eight-month sentence from March, which was suspended for two years, for leaving the scene of a drunk driving accident in Seoul last December.

The decision casts Kang’s future in the big leagues into further doubt. The 30-year-old remains without a work permit to play for the Pittsburgh Pirates. He’d filed for the visa prior to the initial court ruling in March but his application was rejected by the U.S. Embassy here.

The DUI arrest in December was Kang’s third in South Korea, after August 2009 and May 2011. His driver’s license has since been revoked under the three strikes law.

The suspended jail term means Kang will avoid actual prison time if he stays out of trouble over the next two years, but he quickly decided to appeal the ruling, hoping that the court would reduce the punishment to a fine and open the door for him to re-apply for the U.S. visa.

Prosecutors had initially recommended a court fine but the court handed down the suspended sentence, citing the gravity of the situation.

In appealing his case to the court last month, Kang said while he acknowledged his wrongdoing, not being able to play in the majors because of the visa issue would be “akin to a death sentence” to him.

Explaining its decision, the court made a reference to the video review system in baseball, where the original call on the field stands unless there is clear and convincing evidence to overturn it.

“Considering all circumstances, we don’t believe the original sentencing was outside reasonable limits,” the decision read. “All extenuating circumstances were reflected in that ruling. Since he’d been fined twice for DUIs and fled the scene in his third DUI accident, we can’t accept his argument that the original ruling was too harsh.”

The court also said it didn’t believe Kang’s U.S. visa application was rejected because of the earlier sentencing.

Kang, who attended Thursday’s hearing, left the court without speaking to reporters.

Kang fled the scene after crashing into a guard rail on his way to his hotel in southern Seoul on Dec. 2. Kang’s blood alcohol content level was 0.084 percent. The legal limit is 0.05 percent.

While waiting for legal proceedings to resume, Kang has been training on his own in South Korea. The Pirates have placed him on the restricted list, which is for players who are unable to play for non-injury reasons, such as arrests or family matters. Kang will not be paid or earn major league service time while on this list.

Kang enjoyed an All-Star career as a hard-hitting shortstop for the Nexen Heroes in the Korea Baseball Organization for several years before joining the Pirates for the 2015 season. He finished third in the National League Rookie of the Year voting that year after batting .287 with 15 home runs and 58 RBIs in 126 games. Last year, the South Korean launched 21 homers with 62 RBIs, along with a .255 batting average in 103 games.

Pirates’ manager Clint Hurdle has been in touch with Kang through his interpreter, H.K. Kim, who is working with the player in South Korea, and Hurdle previously said he still hopes to see Kang back in the lineup this year.

The Pirates are currently last in the National League Central at 17-23, 5.5 games behind first-place Milwaukee Brewers.

They’ve been slowed by an anemic offense that has scored just 148 runs, second fewest in the NL. They’re also near the bottom of the league in major offensive categories, such as home runs, hits and batting average.