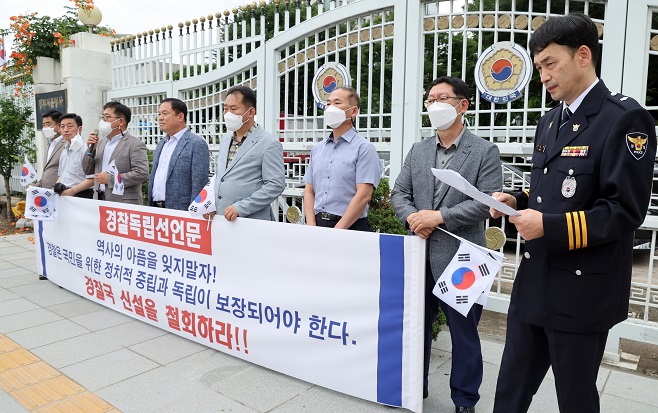 Police officers announce “a police independence declaration” during a news conference in front of the government complex in Seoul on June 27, 2022, in opposition to a plan to set up a police bureau under the interior ministry the following month. The ministry’s police reform advisory committee earlier worked out the plan. (Yonhap)

SEOUL, June 27 (Korea Bizwire) — An envisioned police bureau under the interior ministry will be set up as early as next month, Minister Lee Sang-min said Monday, as the ministry aims to increase its control of the law enforcement agency as part of reform measures.

A police reform advisory committee under the ministry earlier unveiled a set of recommendations, including to create the bureau, despite concerns that the move could put the law enforcement agency under political influence.

“The ministry will push forward with establishing a new organization related to police as soon as possible,” Lee told reporters, adding that the final plan will be drawn up by July 15.

It would mark the first time in 31 years for the interior ministry to exercise direct control of police since the law enforcement agency was spun off as an outside organization of the ministry in 1991 as part of efforts to ensure its independence and neutrality.

The ministry said the responsibility of commanding and monitoring the agency can be implemented immediately in accordance with a wide range of laws, including the Constitution and the law governing police that guarantees various police responsibilities to the interior minister.

In terms of the bureau taking the job of inspections and disciplinary measures on police officers, Lee said the ministry will push forward to revise a related law after going through further discussions.