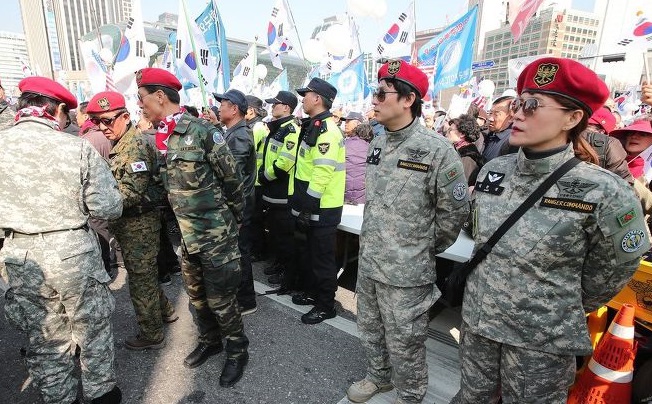 Supporters of impeached President Park Geun-hye hold a rally near the Seoul Plaza on March, 2017. (Yonhap)

SEOUL, Nov. 4 (Korea Bizwire) — South Koreans wearing military uniforms at rallies are becoming a source of controversy, raising questions as to how they should be treated under the law.

The police recently conducted a legal review of the Act on the Control of Military Uniforms and Accoutrements to develop a strict enforcement standard for wearing military uniforms and equipment.

The law was first introduced to prevent confusion in the management of military supplies or obstruction of military operations.

The police deemed that those who wear a military uniform but are not military personnel will be penalized.

The law adds that ‘military uniforms should be worn in a way that does not obstruct identification of an actual military personnel.’

The police said, therefore, that previous versions of military uniforms, military-style apparel, and other look-alikes will not be subject to enforcement.

“Older versions of military uniforms and other military-style apparels not used by the South Korean military are not subject to punishment,” said Lawyer Shin Woo-Chan.

Keeping stock of imitated military uniforms for sales purposes, however, can be punished.