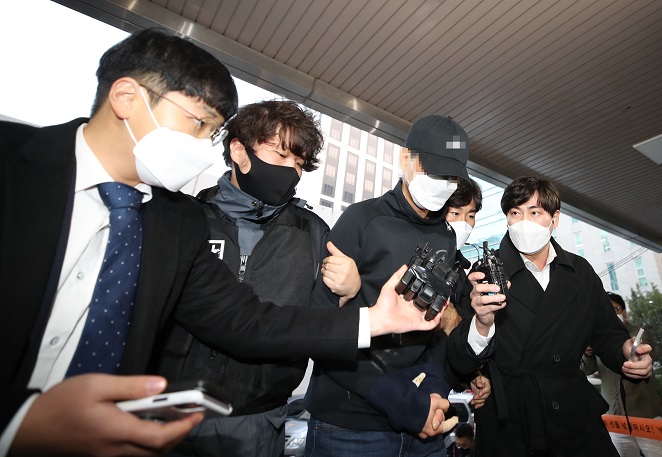 A man is taken to a police station in Seoul on Nov. 20, 2021, after being arrested on charges of killing his ex-girlfriend. (Yonhap)

SEOUL, Nov. 22 (Korea Bizwire) — Police have come under fire for their inadequate responses to violent crimes, as seen in the recent death of a stalking victim under police protection and an alleged dereliction of duty by two Incheon officers accused of sidestepping a knife attack scene.

A man in his 30s was arrested Saturday for killing his ex-girlfriend with a knife at her studio apartment in central Seoul the previous day.

The murder sparked public fury, as it was known that the victim was under police protection after suffering from several months of dating violence, threats and stalking by the suspect.

On Friday morning, when the suspect came to her studio, she made an emergency call twice with a smartwatch provided by the police, but officers arrived there too late.

Police explained later their belated arrival was caused by a technical defect of the smartwatch, as its location was about 500 meters away from her residence.

Police were again embarrassed, as the suspect attempted to commit suicide by biting his own tongue during an interrogation at a Seoul police station Sunday night. He was later sent back to a police detention facility after his injury was found not to be life-threatening.

The Seoul Metropolitan Police Agency issued a statement of apology Monday over the death of the stalking victim and vowed to devise countermeasures to better protect stalking victims.

The incident came amid growing public resentment over the police’s bungled response to a violent dispute last week between neighbors in Incheon, west of Seoul, that left one person unconscious. 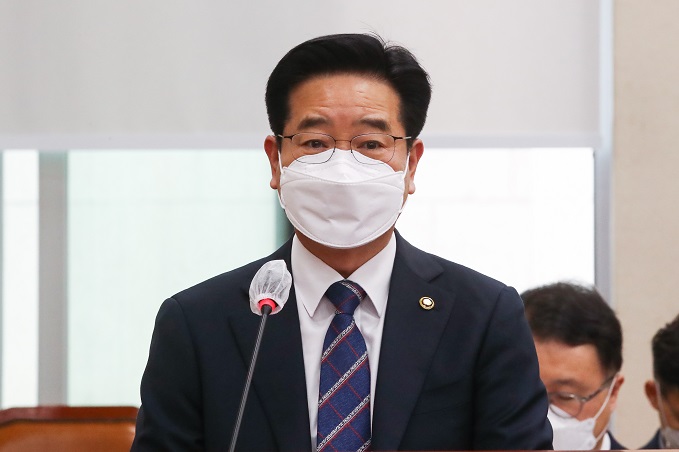 On Nov. 15, a male and female police officer from Incheon’s Nonhyeon Police Station were dispatched to a four-story apartment building after receiving a noise complaint about a 48-year-old man on the top floor from a male resident on the third floor.

When the top-floor resident came down wielding a knife and stabbed the third-floor resident’s wife, however, the female officer allegedly left the scene without trying to bring the attacker under control.

The male officer, who was staying outside the apartment at that time, was also accused of failing to go upstairs in time to help the third-floor resident, who managed to overpower the attacker together with his daughter.

The wounded wife is reported to be brain-dead, and the third-floor resident and his daughter suffered cuts on their hands and faces.

The National Police Agency (NPA) dismissed the chief of the Nonhyeon Police Station on Sunday and plans to take strict measures against the two police officers following an investigation.

Kim Chang-yong, commissioner general of the NPA, also issued an apology on the same day for the police’s inadequate response to the Incheon incident and presided over a videoconference of local police chiefs Monday to discuss countermeasures to prevent a recurrence of similar incidents.

Kim again apologized over the death of the stalking victim and the Incheon incident and stressed all-out efforts to protect the life and safety of the people and regain public trust.

Conference participants also shared the view that police officers are required to make more accurate and prompt judgments at crime scenes and exercise their law enforcement powers more confidently to protect people in an emergency.

Following the meeting, the NPA announced a plan to create a task force on reinforcing on-site response capabilities for violent crimes and enhancing the protection of crime victims.

The task force to be headed by the NPA’s deputy commissioner general will devise comprehensive measures, including an overhaul of the training system for local police and new police officers, strengthening the practicality of equipment and equipment-use training, expanding the legal and institutional framework and improving the manuals, the agency said.

In addition, the NPA plans to improve the smartwatch location check system to better protect crime victims and work out measures to prevent repeated crimes targeting the socially disadvantaged, such as stalking victims.