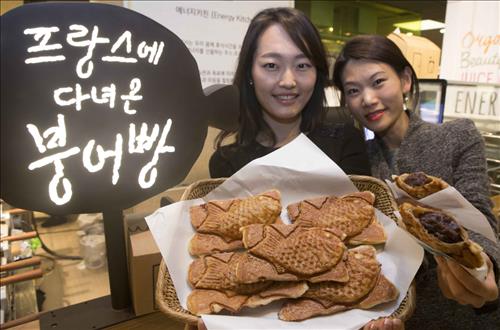 Bungeoppang, the fish-shaped pastry similar to the Japanese pastry known as “taiyaki,” is a much beloved snack for Koreans, especially during the winter season. (image: Yonhap)

SEOUL, March 13 (Korea Bizwire) – A popular pastry for common people has become a luxurious dessert, as it is gaining popularity at department stores and shopping complexes. The move upscale has been matched by a corresponding increase in price, with a jump to 3,000 won (US$2.70), which is 10 times higher than that of similar snacks being sold as street food.

Bungeoppang, the fish-shaped pastry similar to the Japanese pastry known as “taiyaki,” is a much beloved snack for Koreans, especially during the winter season. It is prepared using an appliance similar to a waffle iron, and is stuffed with a mix of red bean paste and sugar. Bungeoppang is commonly sold as a snack by open-air food vendors throughout Korea.

Now, it is being featured at luxurious department stores, where it is selling like hot cakes.  “Bungeoppang from France,” a pop-up store set up last December in the grocery section of Hyundai Department Store’s Apgujeong branch, sells around 200 million won worth of bungeoppang every month.

As products are considered to be great successes when sales exceed 100 million won a month in the grocery sections of large department stores, the bungeoppang store is hitting the jackpot.

The bungeoppang sold at the store features croissant dough matched with various fillings. The prices range between 2,900 won and 3,500 won, based on the ingredients.

The French style bungeoppang gained its fame in Seoul’s Hongdae neighborhood, and is expanding its business into the grocery sections of department stores.