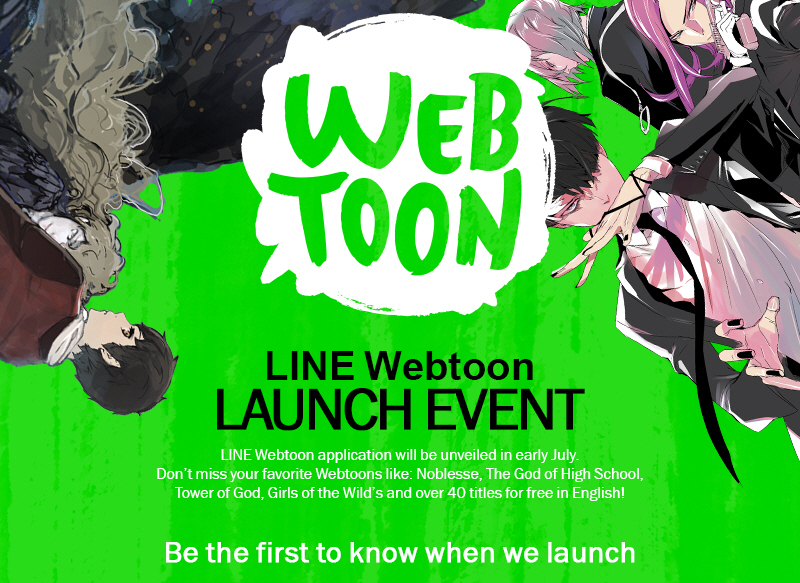 LOS ANGELES, Jul. 2 (Korea Bizwire) — LINE Webtoon, the popular mobile comic app, launched in the United States and worldwide on smartphones, tablets and web browsers. Fans can now view LINE Webtoon through downloading the app for free on Google Play for Android devices starting today and on iOS devices on the Apple App Store later this month and also the mobile website (http://m.webtoons.com). Aspiring American artists will soon be able to leverage the app as a platform to showcase their talents and gain recognition.

A new way to enjoy comics on mobile, the LINE Webtoon service was originally launched as NAVER Webtoon in 2004 by NAVER, Korea’s top search portal, and has pioneered distribution and consumption of webtoons, also known as Internet cartoons. The service receives a daily average of 6.2 million hits from unique visitors and has accumulated a total of 29.2 billion total visits as of June 1, 2014. What began as a new way to enjoy cartoons quickly became a Korean cultural phenomenon, as many production companies throughout Asia began creating movies, animation and games based on the popular LINE Webtoon series.

NAVER has carefully selected a total of 42 cartoons, including globally heralded series among the 520 original NAVER webtoons, and one brand new selection by an American artist, to be available for free on the new LINE Webtoon mobile app at launch. Each will be translated, or created specifically for English-speaking audiences. Popular titles at launch will include “Noblesse”, “Tower of God”, “The God of High School” and more.

Key Features of the LINE Webtoon service include:
•Free content updated every day: Users will always have free access to LINE Webtoon content, with seven to 10 webtoons updated on a daily basis.
•Touch scrolling: Users can use the scroll view to easily navigate comics as the screen automatically changes upon touch and tilt controls.
•Various genres: Users can look up the list of webtoons in various genres, including action, comedy, fantasy, romance, drama, thriller and more.
•Download for on-the-go: Users can download their favorite webtoons to enjoy them offline. Each episode downloaded will be available offline for up to 30 days.
•Push notification: Users can receive update notifications on newly-released webtoons and popular series.
•Share and comments: Users can share their favorite webtoons via social media such as Facebook, Twitter, or LINE, and leave comments. Users can also rate comics to raise exposure to other users.

“Based on NAVER’s experience in discovering and providing the best webtoon content to our fans, we decided to launch LINE Webtoon globally to share them with new audiences around the world,” said JunKoo Kim, Director and Head of the LINE Webtoon Division. “In the U.S., we wanted to partner with established and up-and-coming American creators to expand our selection of titles and help them expand their fan base.”

“LINE Webtoon has always offered a great way to get my work in front of millions of Korean readers, and now with the global launch, new readers in the U.S. and around the world can discover my webtoons,” said Korean webtoonist Jeho Son, the creator of one of the most popular LINE webtoons “Noblesse. “Being a webtoonist is exciting because I can share new episodes easily and regularly on LINE Webtoon, which helps build a strong fan base, growing my audience.”

To see the full list of features and LINE Webtoon in action, watch the trailer below:http://origin-qps.onstreammedia.com/origin/multivu_archive/PRNA/ENR/FX-LA61929-20140702-1.mp4

ABOUT NAVER: (http://www.navercorp.com/en/index.nhn)
NAVER Corporation is Korea’s premier Internet company, operating the nation’s top search portal ‘NAVER’. NAVER was launched in June 1999 and has since stood at the forefront of the growth of Korea’s search service. NAVER has introduced many innovative search services over the years, such as ‘Comprehensive Search’, ‘Knowledge iN’ and ‘Real-time Rising Keyword’. In addition, since releasing the ‘NAVER’ application, NAVER has launched applications for a wide variety of services. NAVER offers innovative mobile services for the global market, including the mobile messenger LINE through LINE Corporation, NAVER’s subsidiary. NAVER launched the Webtoon service in June 2004 in Korea and launched the service worldwide on July 2, 2014.