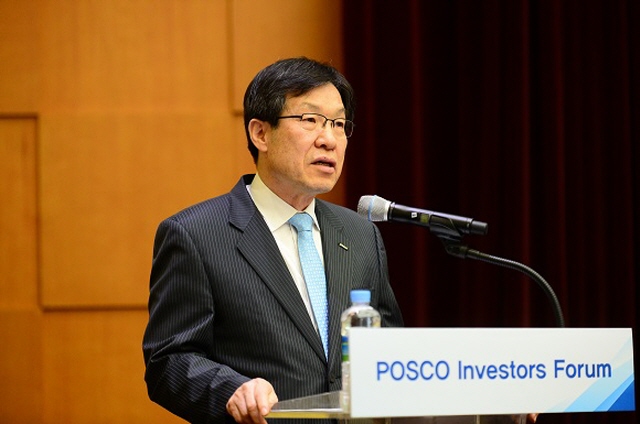 SEOUL, Apr. 18 (Korea Bizwire) — POSCO, the world’s fifth-biggest steelmaker by output, said Wednesday it has begun the process of selecting a new chairman as Kwon Oh-joon offered to step down.

Kwon, who has been leading the steelmaker since March 2014, made the announcement during a meeting with the company’s board of directors that accepted his decision.

“I thought that it would be good to hand over the company’s management to a more energetic, competent and younger person than me,” Kwon told reporters after the closed-door session.

Kwon will remain in his post until his replacement has been picked.

The South Korean steelmaker is set to hold a special council meeting to find a successor next week.

The council is tasked with proposing a list of CEO candidates to the company’s board of directors so that the company can vet their qualifications for the top job before selecting a successful candidate.

POSCO said it usually takes about three months to select a new leader in normal circumstances, but it said the process will be wrapped up as soon as possible.

POSCO officials said Kwon’s doctor told him he needs a break due to accumulated fatigue and Kwon said POSCO can benefit from someone new at the top to lay the groundwork for the next 50 years of growth.

POSCO recently marked the 50th anniversary of its foundation.

Last year, Kwon was excluded from a list of business executives who accompanied President Moon Jae-in on his trip to the United States, sparking speculation that Kwon could follow in the footsteps of his predecessors who failed to serve out their terms.

He was also not part of the business delegation that followed Moon on trips to Indonesia and China in 2017.

Still, POSCO dismissed as groundless the allegations that political pressure or an internal probe by the prosecution were behind Kwon’s resignation offer.

POSCO was a state-run company before being privatized in 2000.

Currently, the South Korean government has no stake in POSCO and South Korea’s national pension fund, the world’s third-largest, with 622 trillion won (US$582 billion) in assets, is the largest shareholder by owning 10.79 percent of POSCO stakes. Foreign investors hold a combined 57 percent stake in POSCO.

Still, POSCO’s former chairmen have been replaced whenever a new administration takes office.

In 2014, then-POSCO chairman Chung Joon-yang was replaced by Kwon Oh-joon about 16 months before Chung’s term was set to expire. Chung had not been invited to key events attended by then-President Park Geun-hye.

Chung’s predecessor, Lee Ku-taek, resigned in 2009 one year after the inauguration of then-President Lee Myung-bak.

The world’s fifth-biggest steelmaker by output saw its net profit nearly triple in 2017 from a year earlier on equity gains from affiliates.