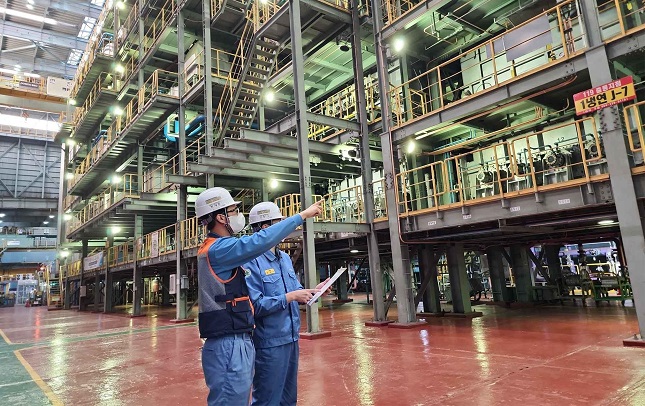 POSCO employees check one of its cold-rolled steelmaking facility in Pohang, about 370 kilometers southeast of Seoul, on Sept. 20, 2022 in this photo provided by the steelmaker.

SEOUL, Sept. 21 (Korea Bizwire) — South Korea’s top steelmaker POSCO said Wednesday it will complete the normalization of its facilities damaged by a recent typhoon within three months, stressing that any major supply glitch would not occur given its product stockpiles sufficient to last 2-3 months.

POSCO was forced earlier this month to halt three blast furnaces at its steel mill and steel processing facilities in Pohang, about 370 kilometers southeast of Seoul, as Typhoon Hinnamnor pounded some of its facilities.

The production of cold-rolled steel sheet and stainless steel was hardest hit by the powerful typhoon that killed more than 10 people, and left severe flooding and damage in its wake.

The steelmaker earlier expects 2.4 trillion won (US$1.7 billion) in lost revenue, some 2.7 percent of the steelmaker’s annual revenue, with 170 tons of lost production.

Earlier this week, the steelmaker restarted all of its three typhoon-hit blast furnaces in phases after a weeklong shutdown. But some rolling and other facilities have remained closed.

The company said it will increase production at five blast furnaces in the southwestern city of Gwangyang, about 300 kilometers south of Seoul, as none of them were affected by the typhoon.

Also, it is considering importing steel products from its plants in Indonesia, India, China and Thailand.