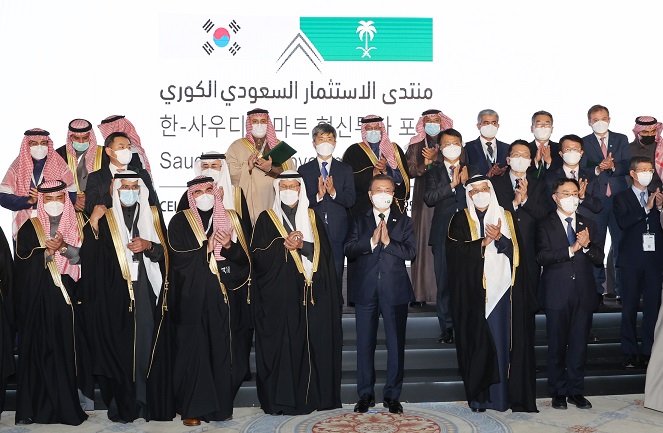 South Korean President Moon Jae-in (5th from L, 1st row) joins a group photo session with other participants during an investment forum between South Korea and Saudi Arabia at a Riyadh hotel on Jan. 18, 2022. (Yonhap)

Under the deal, the two companies will join hands with Public Investment Fund (PIF) to start a project in Saudi Arabia to produce hydrogen using renewable energy sources, such as solar and wind.

They signed the memorandum of understanding Tuesday during a business forum in Riyadh attended by South Korean President Moon Jae-in.

Moon held a summit with Saudi Arabian Crown Prince Mohammed bin Salman earlier in the day and agreed to boost cooperation between the two countries on green energy and hydrogen economy.

The two companies and PIF plan to select the site of the project and conduct feasibility studies within this year, according to POSCO.

PIF is among the largest sovereign wealth funds in the world with total investment assets of around 570 trillion won (US$478 billion).

In 2015, POSCO signed a deal to sell a 38 percent stake in its construction unit to PIF, and both have since continued to collaborate with each other.