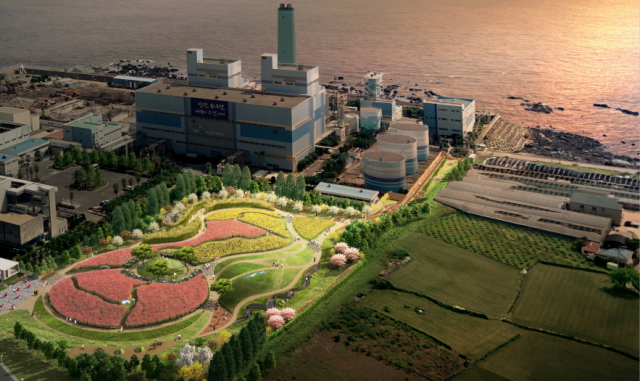 The project will renovate the walkway that stretches 0.7 kilometers around the power plant and set up a park that will cover an area of 19,858 square meters. (image: KOSPO)

SEOUL, April 8 (Korea Bizwire) — A power plant site, once regarded as a place to avoid, has been renovated into a popular destination for both tourists and local residents to rest and enjoy sightseeing.

The Korea Southern Power Co. (KOSPO), a state-run power firm, announced Tuesday that it had completed the first phase of turning the walkways near South Jeju Headquarters in the city of Seogwipo on South Korea’s resort island of Jeju into a popular tourist hotspot.

The project, consisting of three phases, will renovate the walkway that stretches 0.7 kilometers around the power plant and set up a park that will cover an area of 19,858 square meters.

The project aims not only to make economic contributions to the local community, but also ensure the safety of all pedestrians.

For phase 1, KOSPO took down the fences located west of the power plant, and paved a path that connects Hwasoon seaport and the walkway.

In May, the company will begin the second phase where it will take down all wire entanglements around the plant’s main gate, pave a new walkway, and set up benches as well as see-through fences.

The project will resolve the issue of walkway shortages that exposed pedestrians to the risk of road traffic, and attract tourists to enjoy the view of Hwanggaecheon stream that surrounds the power plant.

The company will enter phase 3 this November, aiming for a grand opening in May 2021.