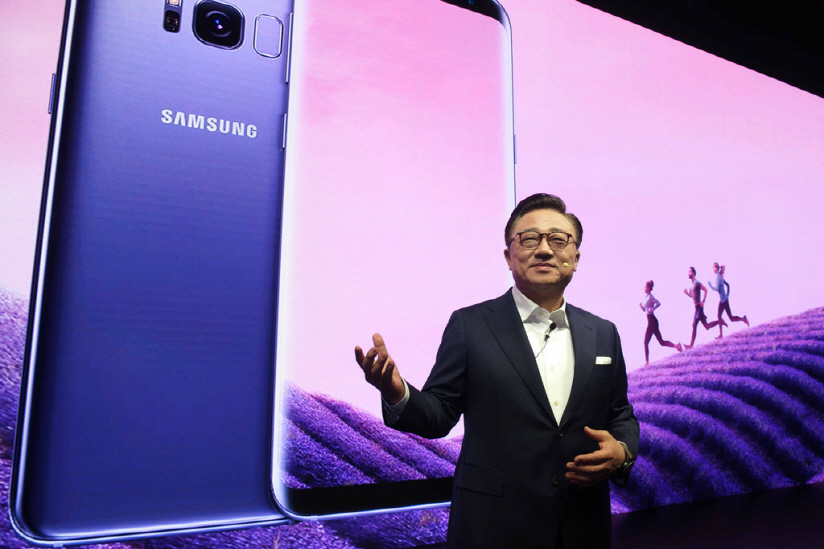 “Initial market response (for the Galaxy S8) is better than expected,” Koh Dong-jin, president of Samsung’s mobile communications business, said at a media briefing. “Response in overseas markets is also good compared to that for the Galaxy S7,” he said stopping short of providing detailed figures.

The mobile division’s chief stressed that the Galaxy S8 is the safest among all mobile devices on the market. “We are targeting pre-orders to top 1 million by Monday.”

The Galaxy S8 smartphones feature high resolution displays that bend on both sides and come with various innovative biometric technologies, such as a face recognition scanner and a smart voice assistance program named Bixby.

After showcasing the Galaxy S8 and the Galaxy S8 Plus late last month, Samsung Electronics kicked off local preorders on Friday which will last until next Monday. The official release is slated for later in April.

The better-than-expected preorders raise hopes that Samsung’s new flagship which will officially hit shelves later this month, may sell more than 40 million copies. Local brokerage firms have been estimating sales of the Galaxy S8 and the Galaxy S8 Plus could reach around 43-60 million units.

Although its IT and mobile business is presumed to have posted lackluster earnings because of the Note 7, industry watchers said the Galaxy S8 and the Galaxy S8 Plus should change this.

Market experts estimate Samsung to have posted an operating profit around 2.5 trillion won in its IT and mobile segment, hovering far below 3.8 trillion won posted a year earlier. But during the April-June period, the mobile division’s performance should improve sharply, they said.

“I think the Galaxy S8 will be the first device to regain customers’ trust and love,” he said.

The company has been trying to put to rest the ill-fated Galaxy Note 7 phablet that was recalled after some caught fire while charging. The high profile incident hurt the company’s image.

As to the Chinese smartphone market, Kho said Samsung has no plans to walk away. “For the past two years, we had a very difficult time in China, but we are preparing with the Galaxy S8 and the Galaxy S8 Plus for Chinese consumers, and will regain our market share there,” he predicted.

To further consolidate potential gains, Samsung said it will expand the eco-system of the Galaxy 8 series by beefing up cooperation with companies and rolling out various gadgets linked to the smartphone.

Samsung Pay is already available in 12 countries, including the United States, China and South Korea.

Samsung said that Galaxy S8 users will be able to make financial transactions and authentification more easily compared with past devices by making use of the built-in iris-scanning function, it said.

The company first placed an iris scanner, a popular and unique feature on the Galaxy Note 7, with the S8 getting the same feature. Through the iris scanner, users can log on to websites or make financial transactions. 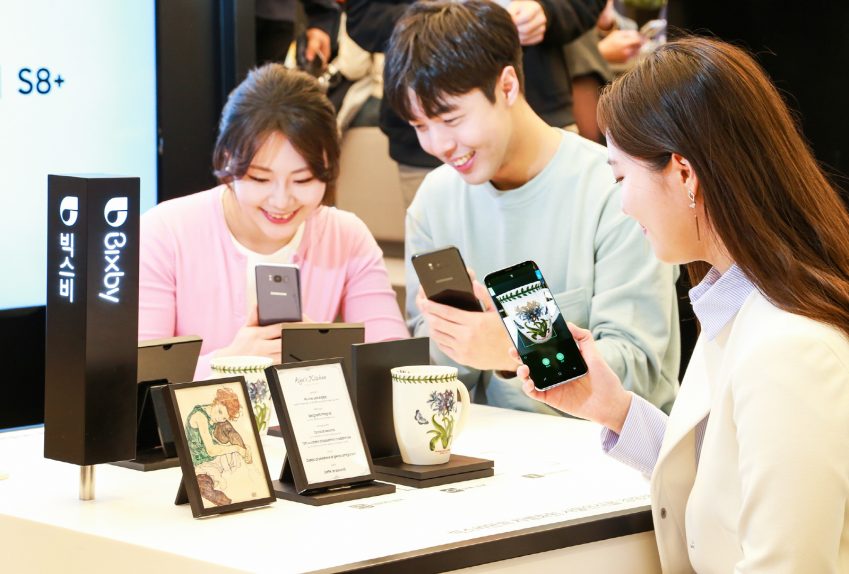 Bixby is a new addition that could give the phones a similar or better user experience compared with rivals like Apple Inc.’s Siri voice recognition system. (image: Samsung Elecgronics)

Among the cutting-edge features incorporated into the new flagship, the artificial intelligence (AI) system Bixby is a new addition that could give the phones a similar or better user experience compared with rivals like Apple Inc.’s Siri voice recognition system.

The tech giant also introduced the DeX, or Desktop Extension, which allows users to utilize the Galaxy S8 smartphone like a personal computer. Just by inserting the smartphone into the DeX, users will be able to use their handsets like a desktop computer.

Samsung also unveiled a new edition of the Gear 360, a virtual reality camera that has a 360-degree field of view. The first device of its kind was introduced in February last year, along with the Galaxy S7.

The new Gear 360 is easy to use and can take high-resolution motion pictures. Compared with its predecessor, the device is also lighter and more compact, and even has a screw so it can be mounted onto a conventional camera tripod or monopod.