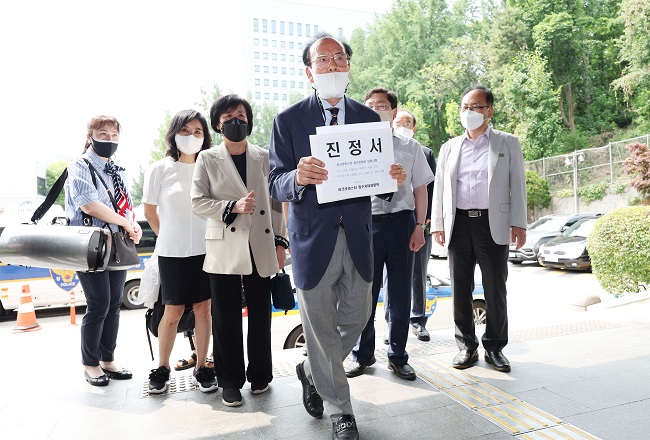 Residents of the Acrovista apartment building in Seoul’s Seocho district file a petition on June 22, 2022, against loudspeaker protest rallies in their neighborhood, with the Seoul Seocho Police Station. (Yonhap)

Employing loudspeakers, progressive protestors from YouTube news channel Voice of Seoul have been staging daily rallies in front of Yoon’s apartment building in southern Seoul since mid-June in retaliation for noisy conservative rallies in front of former President Moon Jae-in’s retirement home in the southeastern city of Yangsan.

Submitting the petition to the Seoul Seocho Police Station, residents of the Acrovista apartment complex asked police to stop protestors from using loudspeakers.

“Residents are having difficulties leading their normal lives. Elderly people and those preparing for exams are particularly in pain,” Jeong Won-heon, a representative of Acrovista residents, said.

About 470 of the complex’s total 720 households signed the petition.

Since taking office last month, Yoon has been commuting from his private home in Acrovista to the new presidential office in Yongsan.

Yoon plans to move into what previously was the foreign minister’s official residence near the presidential office as soon as renovation work is complete.