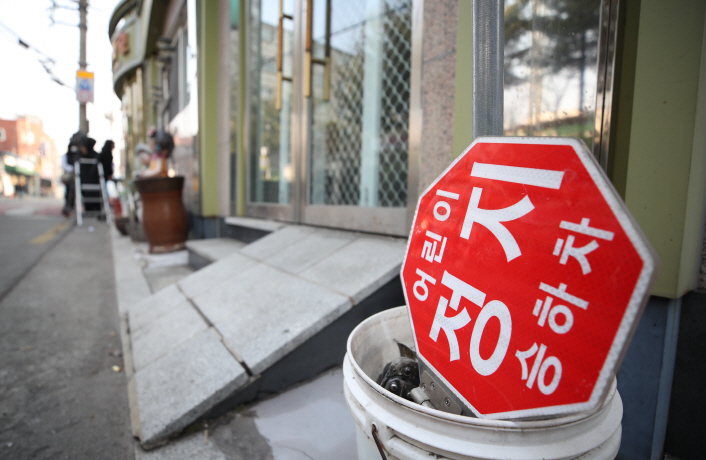 A private preschool in Seoul stands closed on March 4, 2019, as a group of private kindergartens kicked off collective action to postpone the opening of the spring semester in protest at a government reform drive. (Yonhap)

SEOUL/YONGIN, Mar. 4 (Korea Bizwire) — Amid public outcry and government counteraction, the association of private preschools on Monday scrapped a nationwide strike that it staged to protest the government’s plan to scrutinize private kindergartens’ use of state subsidies.

Hundreds of private preschools affiliated with the Korea Kindergarten Association (KKA) postponed the start of the spring semester Monday, causing inconvenience to children and parents, despite the government’s warning of punitive action.

Holding the KKA accountable for the anti-public interest action, the Seoul Metropolitan Office of Education decided to revoke the association’s license later in the day.

The government action, combined with an outcry by parents, eventually led the KKA to scrap the collective action.

“We sincerely apologize to the public for causing problems,” the KKA said in a statement, announcing the cancellation of the strike.

But the association kept its critical stance against the government reform plan, arguing that it would impair private preschools’ autonomy and survivability. Lee Deok-sun, the head of the KKA, also hinted at his resignation, holding himself accountable for the incident.

The government is pushing for the reform of private kindergartens after some preschools were found to have been involved in alleged corruption and misappropriation of state subsidies.

There was no major chaos in regard to the closure Monday as a smaller-than-expected number of private kindergartens joined the drive. But parents complained that the KKA is holding their children hostage as it presses its demands.

“The association’s action is illegal. It should immediately revoke its move,” Education Minister Yoo Eun-hae said during her visit to an education office in Yongin, south of Seoul.

She warned that the private preschools’ collective action constitutes a violation of children’s right to learn.

“The government will cooperate with relevant organizations to minimize parents’ inconvenience by prioritizing the protection of children’s right to learn,” she added.

The group said Sunday that more than 1,500 member institutions would suspend operations Monday. There are more than 3,800 private kindergartens nationwide, and around 3,300 belong to the association.

The education ministry earlier said 365 private kindergartens nationwide were presumed to join the protest. But it later revised the figure down to 239 as the remainder withdrew their plans on Sunday night.

Last year, public uproar was sparked by a ruling party lawmaker’s revelation about some preschool owners’ alleged corruption, including accounting fraud, budget misappropriation and other irregularities.

Lawmakers authored a set of three bills — still pending at the National Assembly — aimed at enhancing the transparency of the operation of private kindergartens. 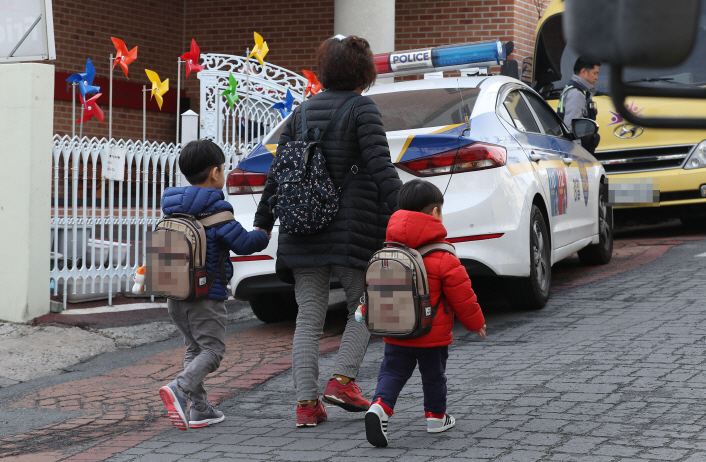 A mother takes her children to a private preschool in Daegu, 300 kilometers southeast of Seoul, on March 4, 2019, for a care service offered in lieu of regular classes due to a collective protest against a government reform drive on private kindergartens. (Yonhap)

In a related move, the government plans to apply a state accounting system called Edufine, currently used in schools, to private kindergartens starting in 2020.

The association is vehemently opposing its adoption as it could put their financial records under government scrutiny.

It claims that the liberal government seeks to frame private preschools as “corrupt, criminal” organizations.

Parents, in particular those from double-income families, faced inconveniences since they had to take their kids to preschools in cases where bus services were suspended.

For children who cannot benefit from this, education offices nationwide kicked off an emergency care service to help look after them at designated public preschools.

“I wonder if my daughter can have lunch today,” said a mother who took her daughter to a private preschool offering such a service.

“If they do not open tomorrow as well, I am even thinking about filing a complaint against them,” she added.

“We will sternly respond to its act to take young children hostage for their cause,” Lee Hae-chan, chairman of the ruling Democratic Party, told a meeting with party members.

DP floor leader Hong Young-pyo urged the government to take strong action against the KKA, including the nullification of its license and criminal punishment.

The authorities had planned to file a complaint against the group if its member institutions did not open Tuesday.

DP lawmaker Park Yong-jin, who made the revelation about private preschools’ corruption, called for an investigation into the KKA chief on suspected embezzlement and tax evasion.