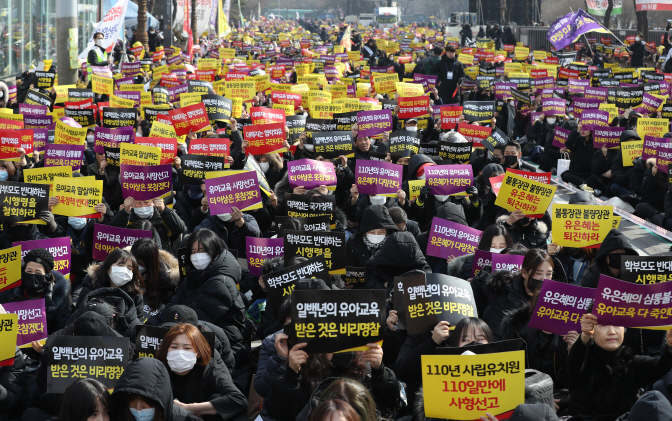 The Korea Kindergarten Association is fiercely protesting against the government’s drive to reform private preschools, many of which were found to have misappropriated state subsidies. (image: Yonhap)

SEOUL, Mar. 3 (Korea Bizwire) — The education authorities of Seoul, Gyeonggi Province and Incheon warned Sunday that local private schools will face harsh administrative punishments if they press ahead with a collective action to protest the government’s reform drive.

In a joint statement, the liberal-minded superintendents of the three regions’ education offices declared there will be no negotiation with the Korea Kindergarten Association (KKA), which is pushing to postpone the opening of the spring semester, slated for Monday.

“It’s a clear violation of the law,” they said, adding all schools that join the planned collection action will be subject to punishment.

They stressed that the nullification of the KKA’s license is an option.

The education ministry, however, retorted that 380 private preschools, 9.8 percent of all private kindergartens in the country, said when surveyed they would not open Monday.

The association is fiercely protesting against the government’s drive to reform private preschools, many of which were found to have misappropriated state subsidies.

The government plans to introduce Edufine, a state-managed accounting system, for all major preschools after a state audit last year found widespread irregularities involving the use of taxpayers’ money by a number of local preschool operators.

The Ministry of Education earlier announced that only around 190 of more than 3,800 private preschools are scheduled to join the association’s move to put off the start of the semester.

But the KKA said that 1,533 schools will take part.

It urged the government to stop trying to control their “private property.”

It argued that establishing a school has required at least 3 billion won (US$2.67 million) worth of private assets. Thus, it added, there should be reasonable accounting of the cost to set up private preschools.

The association even threatened to consider the closure of schools and called on President Moon Jae-in to handle the matter, not his education minister.

It has accused the liberal government of seeking to frame private preschools as “corrupt, criminal” organizations.

A set of bills on enhancing the transparency of the operation of private preschools is pending in the National Assembly.

The ministry said more than 80 percent of South Koreans support reforming private preschools, citing the results of its own phone survey of 1,049 adults across the nation.

Eighty-one percent of respondents were in favor of introducing the legislation and 83.1 percent supported the accounting system for the schools, the ministry said.