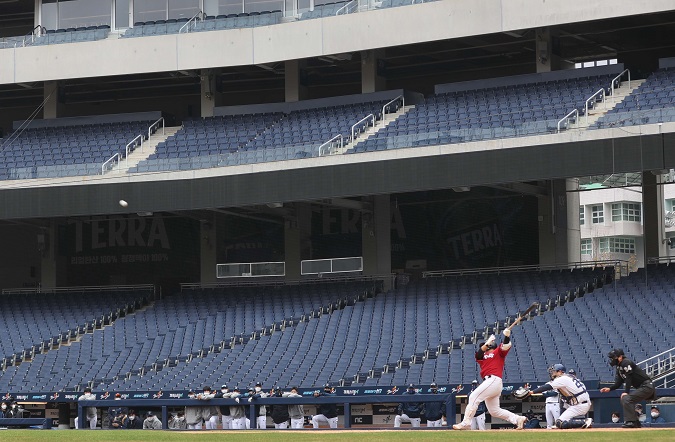 In this file photo, a Korea Baseball Organization preseason game between the NC Dinos and the SSG Landers is under way at an empty Changwon NC Park in Changwon, 400 kilometers southeast of Seoul, on March 14, 2022. (Yonhap)

SEOUL, March 23 (Korea Bizwire) — The popularity of professional baseball in South Korea is in decline, especially among people in their 20s, the exact demographic that teams are trying to attract, a national poll showed Wednesday.

Gallup Korea released results of its survey of 1,004 South Koreans aged 18 or older from March 15-17.

And only 31 percent of the polled said they had at least some interest in the Korea Baseball Organization (KBO), the lowest since 2013 and well off the record high of 48 percent in 2014.

Among 30-somethings, 28 percent said they followed the KBO, the first time the figure dropped below 30 percent.

Gallup Korea called this trend “a red flag,” as the KBO has failed to bring in new fans, while the current fan base is aging quickly.

The Kia Tigers and the Samsung Lions ranked tied as the most popular teams in this poll, each garnering 9 percent support. Gallup Korea noted the level of support for the top-ranked team in its poll failed to reach double figures for the first time this year.

The Tigers, based in Gwangju, 330 kilometers south of Seoul, have won the most Korean Series titles in KBO history with 11. The Lions, who play out of Daegu, 300 kilometers southeast of the capital, are next with seven championships.

On the flip side, 48 percent of the polled said they don’t have a favorite team in the KBO, the highest such rate ever.

The polled were also asked to name up to three favorite South Korean baseball players, based in the KBO or overseas.

Ryu Hyun-jin of the Toronto Blue Jays led the way with 20 percent support, followed by two KBO stars: Choo Shin-soo of the SSG Landers (8 percent) and Lee Jung-hoo of the Kiwoom Heroes (6 percent).

According to Gallup, 63 percent didn’t have a favorite player in the KBO.

The survey had a margin of error of 3.1 percentage points and a 95 percent confidence level.

The 2022 KBO regular season will start April 2. The league’s 10 teams are prepared to swing open their gates and admit fans to full capacity this year, after playing in front of only small crowds due to COVID-19 restrictions the past two years.