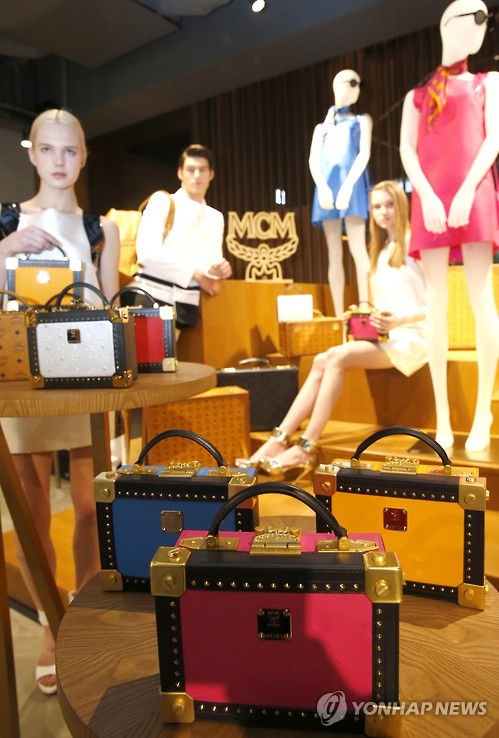 Models hold MCM bags during a renewal event at the flagship store in Seoul on April 21. (image: Yonhap)

“We will combine technology and fashion to create the new framework in the luxury market,” Sungjoo Group said in the newly published book, titled “The Story of Sungjoo.”

“We will make MCM the ‘new school luxury’ that caters to various lifestyles and brings changes, not just making luxury products appealing to a small number of affluent customers,” it said.

As part of efforts, MCM will present “wearable luxury” by collaborating with mobile devices and offer product information on smartphone applications.

Celebrating the 25th anniversary of its foundation this year, Sungjoo Corp. said it aims to increase the number of MCM stores to 700 across the world and generate 2 trillion won (US$1.7 billion) in sales by 2020. 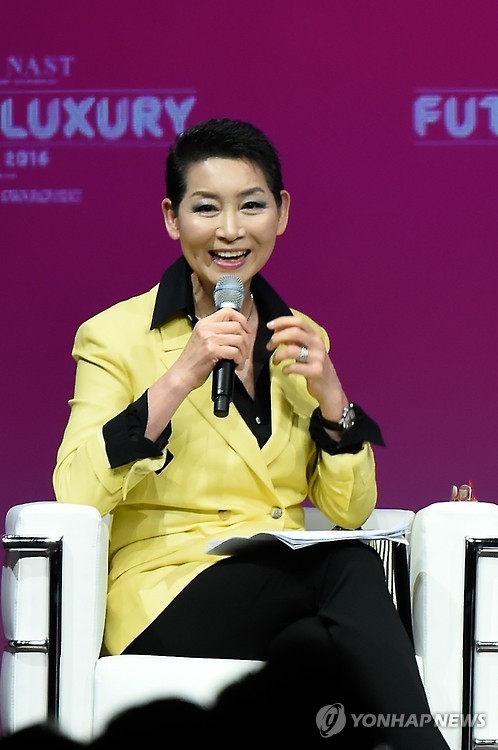 When Kim Sung-joo first founded Sunjoo Group as a rare female entrepreneur of the country at the time, few would have expected the small firm could join the world’s top 50 fashion groups.

Born into a prosperous family in South Korea in 1956, the youngest of six children is in all senses a maverick in her own family and the nation’s male-dominated business circle.

Her father is Kim Soo-keon, the founder of Daesung Industrial Corp., a Korean conglomerate whose businesses range from energy and auto parts to oil and industrial gas.

Graduating from Yonsei University, Kim defied her father’s demands not to enter business, and instead, went abroad to study at Amherst College in Massachusetts and the London School of Economics.

Then while continuing her studies at Harvard University, she met a Canadian classmate and married him. Her furious parents disowned her, and she had to drop out of school and work at Bloomingdales in New York to support herself.

After her apprenticeships in the luxury American department store, she came back to Korea and founded her own fashion business in 1991.

As she couldn’t get any financial support from her father, Kim had to start her own business from scratch in a small office in Seoul.

But the company had to streamline its business in the aftermath of the 1997 Asian financial crisis, which made royalty fees skyrocket and put icy water on consumer sentiment.

After managing to stay afloat during the tough years, Sungjoo Corp., which had the licensing rights of German craft handbag maker MCM, decided to take over the then-struggling company in 2005.

Breaking the prejudice that practical backpacks can’t be part of luxury, MCM released unisex backpacks and big bags that have space for laptops. They turned out to be a big hit among younger customers and became signature items for the brand.

Kim also started to open flagship stores in Europe, the United States and Asia, rapidly expanding the number of stores in China. Now, MCM sells in 30 nations, and China is one of its biggest markets.

The spirited female entrepreneur, who always sticks to a signature short cut, bold eye makeup and red lipstick, has built her wealth from scratch, but monetary success is not her ultimate goal.

The dedicated Christian always stresses that her employees “succeed to serve, not serve to succeed,” the book quoted her saying, presenting the 60-year-old CEO’s thick, wrinkled hands as a gesture of her support on the last page.