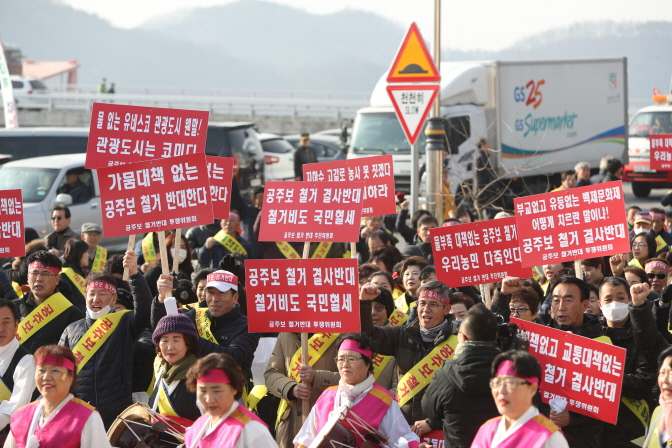 About 500 residents of Gongju hold a rally near the Gongju Weir on the Geum River, central South Korea, on Feb. 26, 2019, denouncing a joint government-private committee’s recent proposal to dismantle the controversial weir. (Yonhap)

Last Friday, the Four Rivers Survey and Evaluation Planning Committee established by the Ministry of Environment and civilian experts announced the proposal to dismantle the Sejong Weir on the Geum River in central South Korea and the Juksan Weir on the Yeongsan River in the southwestern region. A weir refers to a low barrier built across a river in order to control and direct the flow of water.

The committee said it reached its conclusion on five out of 16 weirs built on the nation’s four major rivers — Geum, Yeongsan, Nakdong and Han rivers — during the administration of Lee Myung-bak, who served as president from 2008 to 2013. 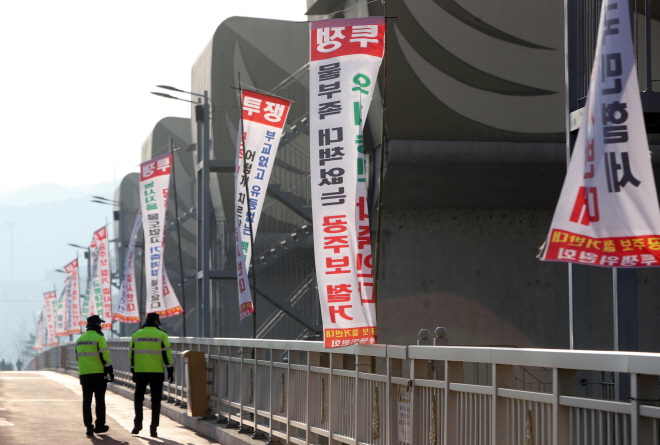 The dismantling of the weirs will inevitably improve the water quality and ecosystems of the major rivers, said the committee, which analyzed their economic feasibility, water quality, ecosystems, irrigation, flood control, the opinions of residents and facility safety over the past four months.

Local environmental activists immediately welcomed the committee’s recommendation, saying all river weirs must be eliminated to help improve water quality and restore ecosystems of the major rivers, which have been frequently hit by harmful green tides.

“The restoration of ecosystems should be prioritized in the dismantling of the weirs,” said Park Eun-young, an activist of Green Korea Daejeon, a civic environmental group.

But farmers and heads of local governments are strongly opposed to the proposed destruction of the river weirs, warning about a severe scarcity of agricultural water and calling for measures to secure additional agricultural water.

“The opening of the Gongju Weir has already resulted in a steep reduction in irrigation water along the riverside areas. Farmers are deeply concerned about a shortage of water during the farming season in case of the dismantling of the weir,” Lee Hak-jae, head of a farming village in Gongju, said.

Gongju Mayor Kim Jong-sup has also declared his objection to the dismantling, warning about its negative impact on the supply of agricultural water.

The committee’s proposal has also triggered a heated debate in political circles.

The ruling Democratic Party and other liberal parties welcomed the dismantling proposal as a reasonable move to restore the rivers’ ecosystems.

But the main opposition Liberty Korea Party dismissed the proposal as an attempt to obliterate accomplishments of a previous conservative government. The conservative party said the committee’s decision was not objective, fair and transparent, as it failed to consult the opinions of local residents. 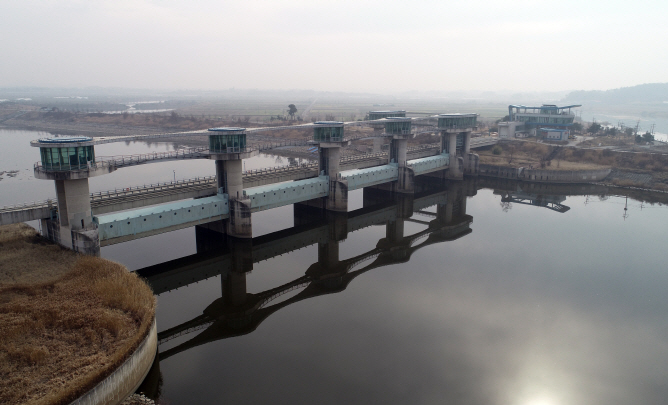 The Juksan Weir on the Yeongsan River, southwestern South Korea, which faces dismantling under a recommendation from a joint government-private committee. (Yonhap)

The conservative Lee government completed the restoration project of the four rivers at a cost of 22 trillion won (US$19.5 billion) in 2011 in a bid to combat water scarcity, improve water quality and restore river ecosystems.

But President Moon Jae-in has criticized the costly restoration project and 16 weirs built across the four rivers for worsening water quality and spreading harmful green tides.

Following his inauguration in May 2017, Moon ordered an audit into the policy decisions of the four river project, as well as the opening of 11 of the 16 weirs.

The Moon government is scheduled to finalize its decisions in June based on the committee’s recommendations. The joint government-private committee is planning to issue its recommendations on how to deal with the remaining 11 weirs on the Nakdong and Han rivers by the end of the year.

Since the panel announced the recommendation, tensions have grown in local communities. A group of about 500 Gongju residents held a rally near the Gongju Weir on Tuesday to demand the government cancel any plan to dismantle the weir. The angry residents asked the government to conduct a poll of local residents over the fate of the weir, calling the recent decision by the government-private committee “politically oriented.”

Most farmers in Naju, South Jeolla Province, have also expressed jitters about agricultural water shortages that might be caused by the dismantling of the Juksan Weir on the Yeongsan River.

“How can we farmers cope with a drought after the Juksan Weir is dismantled? The weir was built at a huge cost. I’m not sure if the decision was reached after a thorough analysis of its advantages and disadvantages,” said a 65-year-old farmer of rice and barley.

Another farmer joined in the criticism, saying dismantling the weir is unnecessary because its floodgate can freely control the flow of water.