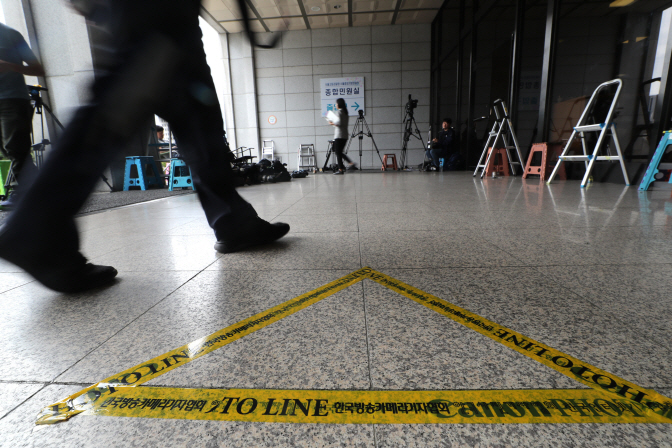 Photographers and reporters wait for the arrival of Justice Minister Cho Kuk’s wife at the Seoul Central District Prosecutors’ Office in southern Seoul on Oct. 3, 2019. (Yonhap)

SEOUL, Oct. 4 (Korea Bizwire) — The prosecution will terminate its practice of openly summoning suspects or others involved in its investigations as part of efforts to better protect their human rights, the Supreme Prosecutors’ Office (SPO) said Friday.

At present, prosecutors disclose schedules for questioning suspects or witnesses in advance, exposing them to the media.

Critics have long denounced the practice as violating the basic rights of suspects and others by exposing them to the media before their innocence or guilt is proven, whereas others have advocated the system as necessary to satisfy the people’s right to know.

The SPO said in a statement Prosecutor General Yoon Seok-youl has instructed all prosecutors’ offices nationwide to entirely abolish the practice.

The top prosecutor’s instruction came days after President Moon Jae-in ordered him to come up with measures to reform the prosecution’s organization and investigation practices.

Contrary to the prosecution’s previous pledge to publicly call in Cho’s wife, she was allowed to enter the prosecutors’ office through its underground parking lot to avoid the media.

“Following the abolition of the public summoning practice, the prosecution will soon work out measures to protect both the human rights of investigation-related individuals and the people’s right to know,” an SPO official said.