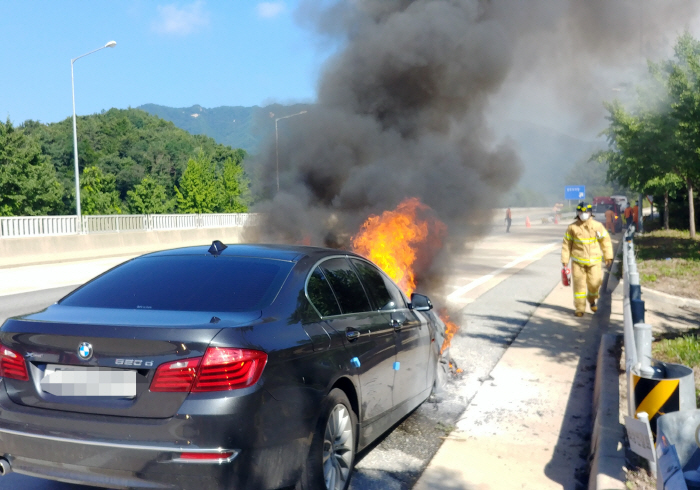 This photo provided by Yeongju Fire Station on Jul. 15, 2018 shows a BMW 520d model gutted by an engine fire on a highway in Yeongju, North Gyeongsang Province, on the same day.

SEOUL, Sept. 16 (Korea Bizwire) — Prosecutors on Wednesday raided BMW Korea’s office and server storage in Seoul, as part of their investigation into the German automaker’s suspected attempt to cover up mechanical defects blamed for a string of engine fires over the past years.

About 20 prosecutors and investigators from the Seoul Central District Prosecutors Office searched BMW Korea’s main office in downtown Seoul and its server storage in southern Seoul.

The surprise raid signaled the beginning of the prosecution’s formal investigation into the German auto giant after local police handed over the case to prosecutors in November last year.

Police investigators had also raided the same BMW places during their probe from 2018 to 2019.

The Seoul prosecutors reportedly conducted their own raid to secure additional data and evidence. They are said to be planning to call in BMW Korea Chairman Kim Hyo-joon and other company executives after analyzing documents and data seized from the raid.

Police launched an investigation into BMW Korea in 2018 after over 40 local victims of engine fires filed complaints against the German automaker and its South Korean affiliate.

BMW Korea is suspected of having attempted to cover up defects in exhaust gas recirculation coolers and pipes, which were known as the most likely cause for successive engine fires.