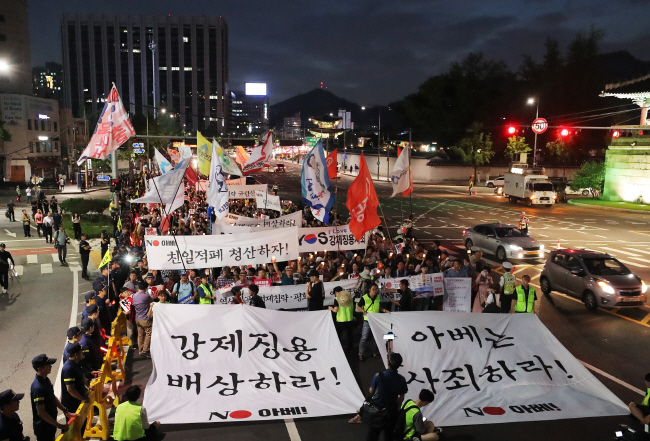 About 5,000 activists representing 596 civic groups and citizens held candles in the northern part of the Gwanghwamun Square during the second such demonstration, following one held last week.

Participants held up banners that read, “No Abe!” and “Apologize for forced labor” while shouting slogans like, “Wipe out pro-Japanese,” and “We condemn Abe.”

Such steps by Tokyo are apparent retaliation for South Korean court rulings that ordered Japanese companies to pay damages to Korean victims of forced labor during World War II when Korea was a Japanese colony.

Tokyo’s moves have fueled anti-Japan public sentiment in Korea, with people boycotting Japanese products and a widespread campaign encouraging people not to travel to Japan.

At Saturday’s vigil, protesters blasted the Abe government for pursuing “militarism” through such unilateral measures and vowed to continue the anti-Japan campaign across the nation unless Tokyo puts a stop to its actions.

“We are not here to hate Japanese people. We are here to talk about justice,” Jeon Woo-yong, a historian, said. “What Abe is doing is militarism and it’s our responsibility to fight for world peace.”

Another participant called the boycott of Japanese products “an objection to Abe’s dream of reviving militarism without a proper reflection on the atrocities Japan committed.”

The organizers said they plan to hold rallies for at least for another three weeks until Aug. 15, Korea’s national holiday to mark the country’s liberation from the Japanese colonial rule in 1945.