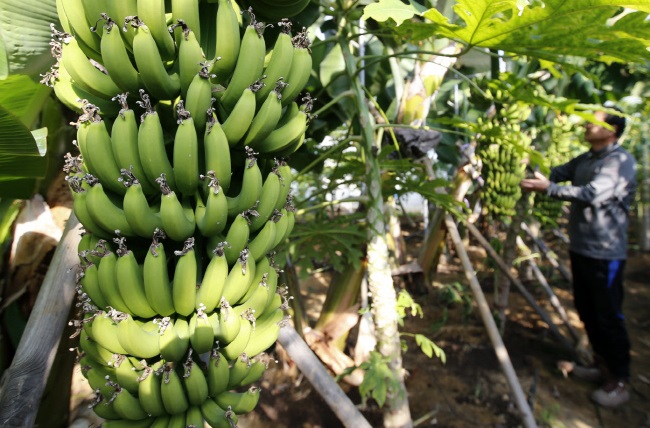 Under the master plan, the institute will push for the development of technology that can make the cultivation of subtropical vegetables and fruit trees profitable. (image: Taean County Office)

Chungcheongbuk-do Agricultural Research and Extension Services announced on Wednesday that it has established a master plan to push for by 2030 to foster and spread the cultivation of subtropical crops in line with climate change.

Currently, 60 farms in the province grow subtropical crops on 19.6 hectares of farmland.

The institute plans to invest 5.61 billion won (US$4.92 million), including 2.65 billion won in state funds by 2030, to develop technology and increase the cultivation area of subtropical crops to 100 hectares.

The decision to push towards diversification with subtropical plants is the result of rising temperatures.

The average temperature in the province has risen 0.83 degrees over the past 45 years, and the warming phenomenon of longer summers and shorter winters is expected to occur at a rapid pace.

Under the master plan, the institute will push for the development of technology that can make the cultivation of subtropical vegetables and fruit trees profitable.

It also includes a plan to create a subtropical belt that connects subtropical farms in the province and uses renewable energy as well as designating a “subtropical route” that merges rural tourism resources.

During the First Agricultural Innovation Festival in North Chungcheong Province, which will be held in October, the government will prepare attractions and experience events based on research achievements.