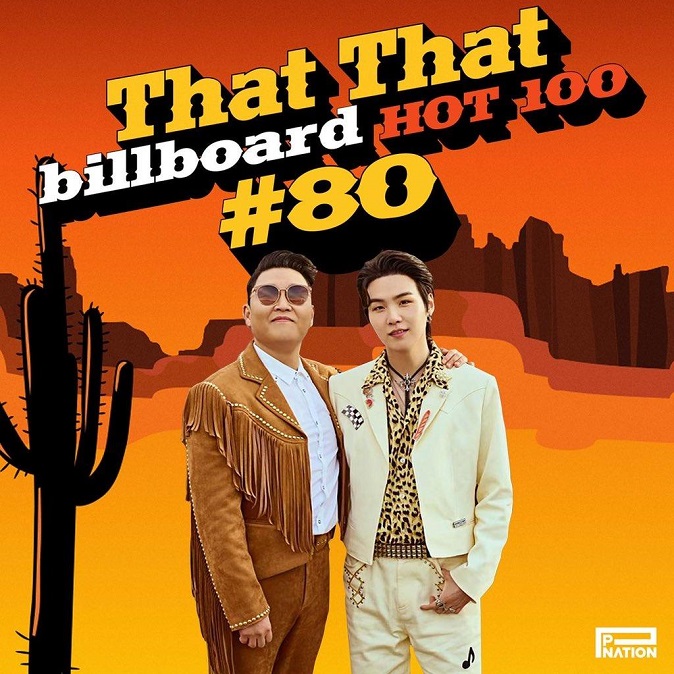 This image captured from South Korean singer-rapper Psy’s Twitter celebrates his new song’s entry into Billboard Hot 100 at No. 80.

SEOUL, May 10 (Korea Bizwire) – South Korean singer-rapper Psy has put his name onto Billboard’s main singles chart for “That That,” his collaborative tune with Suga of K-pop supergroup BTS, the U.S. music magazine said Tuesday.

The main track from Psy’s ninth full-length album “Psy 9th” debuted at No. 80 on this week’s Hot 100 songs chart, Billboard said on Twitter. All charts will be updated on the company’s website a day later.

The album was the first release from the singer in five years.

The Hot 100 ranks the most popular songs of the week in the U.S., measured by streaming, radio airplay and sales data.

It marks Psy’s fifth song that has been on the chart.

The body-twisting Latin-infused song has drawn attention from global K-pop fans for being a collaborative single with Suga. The BTS rapper participated in producing, writing lyrics, composing and arranging the song.

It earlier debuted at No. 61 on the British Official Singles Chart Top 100 dated May 6-12.