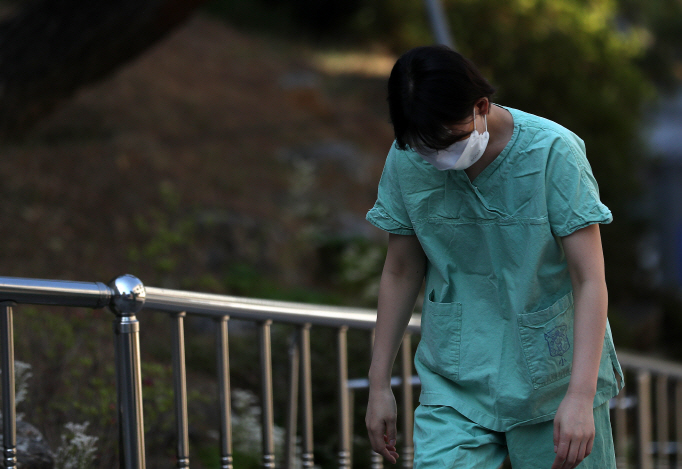 A medical worker looks tired after completing a shift for the service of people infected with the new coronavirus at a hospital in the southeastern city of Daegu on April 8, 2020. (Yonhap)

SEOUL, Aug. 18 (Korea Bizwire) — A majority of the medical staff at public health centers working on the frontlines of the battle against COVID-19 are experiencing depressive symptoms and anxiety, with some even considering suicide.

The Central Disaster and Safety Countermeasures Headquarters conducted a survey of 1,765 medical staff working at 17 public health centers throughout the country experiencing a high inflow of infected COVID-19 patients, to study their mental health.

The survey showed that 33.4 percent of them were exposed to a high risk of depression, with a depression score of over 10 points.

This result easily surpasses the proportion among the general public (18.1 percent), and public health doctors (15.1 percent).

The survey also revealed that 19.9 percent had suicidal thoughts, which was 7.5 percent points higher than the proportion among the general public (7.5 percent).

Another 27.6 percent of public health center staff were exposed to high risk of anxiety, which is more than two times the average proportion among the general public (12.2 percent).

At 91.1 percent, almost all of the medical staff responded that their quality of life had deteriorated, with 76.4 percent and 81.1 percent reporting deterioration in their physical and mental health, respectively.

Compared to the pre-coronavirus era, medical staff receiving treatment for sleeping disorders rose from 134 to 165 people. Staff members being treated for depression rose from 105 to 118 people.

Roughly two thirds of the medical staff said they don’t feel competent or proud to be on the frontlines fighting the pandemic. Only 34.9 percent said otherwise.