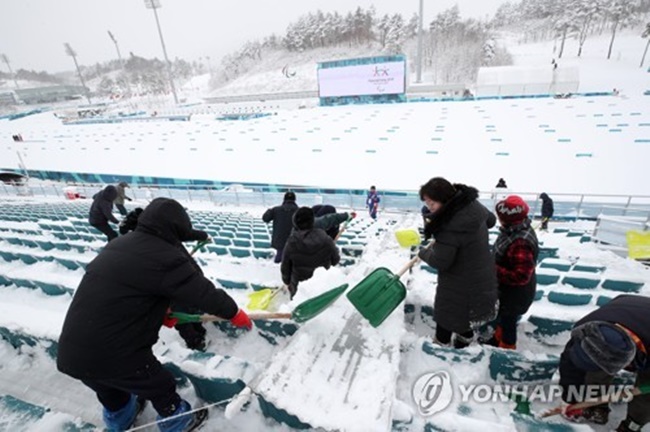 The local organizers expect about 10 to 20 centimeters of snow to fall from Thursday to Friday morning.

The opening ceremony for the PyeongChang Paralympics is scheduled for 8 p.m. Friday at the Olympic Stadium in PyeongChang, Gangwon Province.

The pentagon-shaped arena, which can accommodate 35,000 spectators, doesn’t have a roof. To clear the snow from the center stage and from the seats, the organizers said they will use all resources available.

PyeongChang, an alpine town notorious for cold weather and strong winds, already saw 20 centimeters of snow from Sunday to Monday, and the organizers have been working hard to clear the snow.

“Since there has to be a rehearsal for the opening ceremony, we used seven excavators, eight dump trucks and 200 people, including military soldiers, to clear the snow near the Olympic Plaza,” said Yoo Tae-chul, who is in charge of environment issues for the organizing committee. “In particular, no heavy equipment can be used at the Olympic Stadium, so our employees had to clear the snow with their own hands.”

Due to the upcoming snow forecast, Yoo said the organizers requested that a nearby military unit provide some 600 soldiers to join the snow removal activity.

The organizing committee workers will be also dispatched to the ceremony venue to clear snow from early Friday morning.

“We need to clear the snow perfectly in such a short time to have the opening ceremony without interruption,” he said. “I hope we don’t see snow on opening day, but even if it comes, I hope we have less snow than forecasted.”