According to FnGuide, operating income forecasts for the January-March period have been downgraded for 84.4 percent of the 65 listed companies from estimates made Jan. 20, when South Korea reported its first confirmed case of the novel coronavirus.

The businesses, which belong to the top 100 firms listed on the main stock market, cover those for which three or more local securities companies have put forward first-quarter forecasts.

The downgrade comes as the new coronavirus has turned into a pandemic, sparking worries over a global economic recession, or at least two consecutive quarters of contraction.

The revised figure represents a 3.2 percent increase from the same period a year earlier, but some brokerages have forecast Samsung’s first-quarter operating profit to shrink on-year.

DB Financial Investment Co. has projected Samsung’s operating profit to reach 5.9 trillion won in the first quarter, down 4.6 percent from a year earlier.

“Samsung may inevitably suffer weaker earnings for its semiconductor and display sectors in the wake of COVID–19 amid sluggish sales of smartphones and home electronics products,” said Eo Kyu-jin, an analyst at DB Financial Investment.

Another chip giant, SK hynix Inc., has seen the median forecast for its first-quarter operating income cut 22.9 percent to 457 billion won in the period. The downgraded figure is down a whopping 66.6 percent from a year earlier. 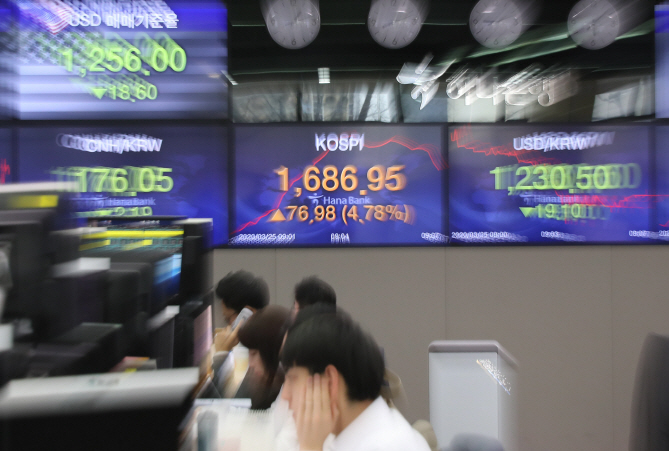 Currency dealers work in the dealing room of Hana Bank in Seoul on March 25, 2020. (Yonhap)

The average outlook for leading automaker Hyundai Motor Co. stands at 926.4 billion won for the current quarter, down 15.4 percent from two months earlier.

Securities companies have forecast major oil refiners SK Innovation and S-Oil will switch to a loss for the first quarter.

Only 10 firms, including major liquor maker Hite Jinro Co. and instant noodle giant Nongshim, have basked in earnings upgrades over the cited period.

With growing worries over first-quarter earnings, local brokerages have also lowered their target prices for more than six out of the 100 largest-cap businesses.

Cited as another destabilizing factor for their prices is foreign investors’ selling binge of South Korean stocks.

Offshore investors extended their net selling to 15 sessions at Wednesday’s close, with Samsung Electronics bearing the brunt of their brutal sell-off.