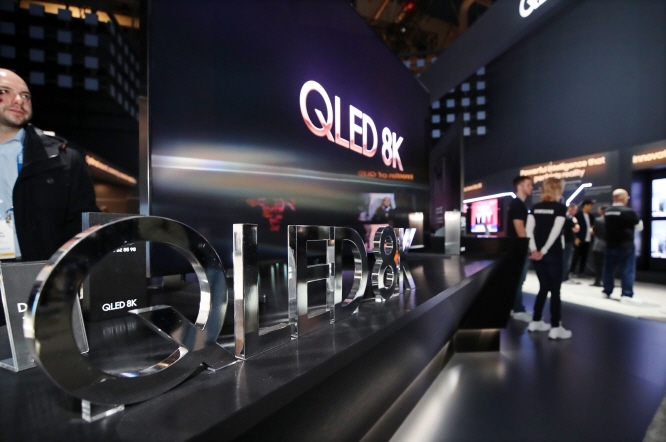 A QLED 8K TV from Samsung Electronics is on display at the Consumer Electronics Show 2019 in Las Vegas on Jan. 9, 2019. (Yonhap)

According to IHS Markit, 2.68 million QLED TVs were sold worldwide in 2018, more than the 2.51 million OLED sets. The winner was confirmed after fourth-quarter data were announced by the market surveyor.

QLEDs picked up big sales in the October-December months during the global shopping season, highlighted by Black Friday. Some 1.1 million sets of the premium TV were estimated to have been shipped during the fourth quarter alone, compared with 895,000 for OLED TVs.

The year’s sales amount, however, was higher for OLEDs at US$6.53 million compared with $6.34 million for QLEDs.

Samsung has been pitching its QLED lineup, offering big discounts in North America. It is planning to release QLED TVs in 60 more countries, from Southwest Asia to Latin America and the Middle East, this year, after the launch at home and in Europe in the fourth quarter.