“People should not exploit other people’s tragedy for their causes. Those who want to realize justice are likely to exploit the situation for their own sake. They should know that only God is one who can realize it.”

“I want to be nonpolitical.”

“I hope families hurt by the Sewol tragedy could make a concession to some degree. Only then could an agreement be reached.”

Cardinal Andrew Yeom Soo-jung at a press conference on August 26. 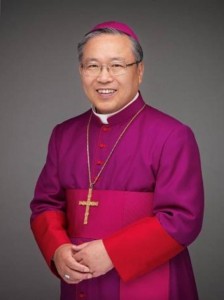 SEOUL, Sept. 2 (Korea Bizwire) — On August 26, Cardinal Andrew Yeom Soo-jung, archbishop of Seoul, held a press conference at the diocesan curia of Seoul in Myungdong. He said that everyone must help each other heal the pain of the Sewol disaster, warning that there are always people ready to exploit other’s tragedies for their own sake. In addition, he requested the bereaved families of the ferry disaster to concede to a certain degree.

Cardinal Yeom’s remarks have stirred up controversy as it was totally contradictory to Pope Francis. During Pope’s five-day visit to Korea, the pontiff sincerely consoled the family members, listening to them carefully. When asked whether the meeting with the families would be misinterpreted politically, he said, “One cannot be neutral about human pain.”

To the Cardinal’s remarks, many Koreans have expressed disappointment on the Internet. Park Ji-won, congressman of the opposition New Politics Alliance for Democracy posted his feeling of aghast on his Twitter. Han In-seob, professor of Seoul National University also said, “People are even joking that the Pope made me almost go to the Catholic Church but the Cardinal definitely stopped me from doing so.”