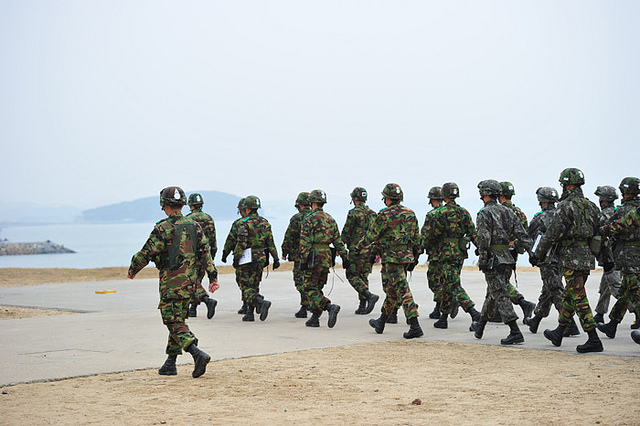 According to the Ministry of National Defense, the number of soldiers that have entered a ‘Green Camp’ found in type A installations showed a drastic increase over the years, from 2,582 in 2012 to 3,132 in 2014. (image: Republic of Korea Armed Forces/flickr)

SEOUL, Sept. 7 (Korea Bizwire) - It turns out that the number of soldiers who have experienced maladjustment or were contemplating committing suicide has increased in the three years since 2012.

According to the Ministry of National Defense, the number of soldiers that have entered a ‘Green Camp’ found in type A installations showed a drastic increase over the years, from 2,582 in 2012 to 3,132 in 2014. The number this year, as of June 30, was 1,725 soldiers.

Green Camps are situated at 24 army bases and four naval bases. They are special camps where soldiers thinking about committing suicide or who are having difficulty adjusting to life in the army go to get professional help that will make it easier for them to get along in the army.

Those who enter Green Camps receive professional counseling and therapy. During the first week, the soldiers go through art, laughing and music therapy, cooking and so on, then in the second week, anger management and volunteer work is added to the program.

Among the 1,725 soldiers that entered Green Camps this year, 794 (46 percent) were treated successfully, 469 (27.1 percent) went back to their units after a second visit to a Green Camp, and 462 (26.9 percent) were declared unfit for returning to active duty.

The Ministry of National Defense plans to improve the facilities at the Green Camps, and develop programs to help deal with the symptoms of troubled soldiers, as well as a system that can treat soldiers experiencing difficulty adjusting without them having to leave their units.

In addition, the Ministry of National Defense plans to establish a research facility, the ‘Institute on the Behavior and Psychology of Soldiers’, in order to identify those who might not be suitable for military service at an early stage.