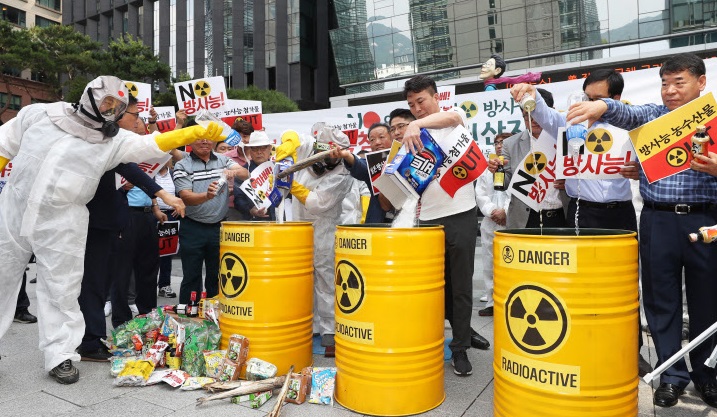 Members of the Korea Federation Midsized and Small Merchant hold a rally in front of the Japanese Embassy in downtown Seoul on Aug. 28, 2019, to showcase the resolve of local businesses to block radiation contaminated food additives from the island nation being used in South Korea. (Yonhap)

SEOUL, Sept. 13 (Korea Bizwire) — Japanese foods that have been barred from entering the country due to potential radiation contamination remained low this year as South Korea maintains its tight inspection system, according to the government Friday.

Four shipments of Japanese foods totaling some 5 tons were denied entry for the whole of 2019 as of late last week, roughly on par with the annual tally from 2016 onward, the data from the Ministry of Food and Drug Safety showed.

South Korea restricted imports of Japanese fishery and agricultural products and have kept close tabs on processed food after three reactors at the Fukushima nuclear power plant in Honshu experienced an earthquake and tsunami-triggered meltdown in March 2011.

The subsequent release of radioactive materials into the surrounding environment has been rated as the worst nuclear accidents since the 1986 Chernobyl disaster.

In 2015, trace radiation was found in eight shipments worth little over 15 tons.

“For the past eight years Seoul has demanded examination certification, making clear that the products were not contaminated with strontium and other radionuclide if inspectors detected even minute traces of radiation,” the ministry said.

The ministry said that while it does not formally share its findings with neighboring countries and international organizations, related data are forwarded to business in both South Korea and Japan that engage in the trading of food products.