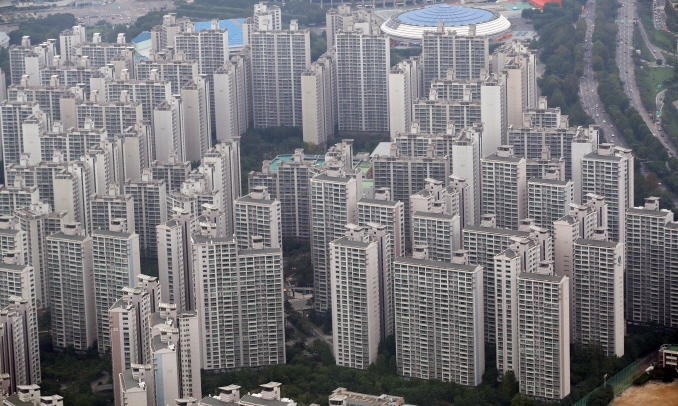 It is based upon an analysis of features of household assets in five nations — South Korea, the United States, Britain, Australia and the Netherlands — by the Mirae Asset Retirement Institute.

According to the report, real estate property accounted on average for 51.3 percent of the total assets of South Korean households, followed by Australia with 50.4 percent, the Netherlands with 45.5 percent, the U.S. with 43.8 percent and Britain with 37.4 percent.

Of the real property possessed by Koreans, 13.5 percent was property where owners do not actually live, which is 3.4 times higher than the average among the other four countries.

Deposits for “jeonse” home rental arrangements also took up 11.1 percent of Koreans’ total wealth, the report showed, noting that 19.5 percent of South Korean households rent a home through this unique system as of August this year.

“The real estate-oriented assets portfolio is far from stable, as their wealth conditions will fluctuate much with changes in the property market,” Shim Hyun-jeong, an expert at Mirae Asset, said.

Koreans were also found to prefer safer means of investment, as the majority of their financial assets were fixed deposits at banks, and savings insurance with stocks and investment funds took up a far smaller proportion compared to the other countries, the report showed.

“Koreans turned out to be poorly prepared for their post-retirement life,” the report pointed out, calling for “the re-arrangement of their wealth portfolio to boost the growth potential of their assets and to be better prepared for their old age in a fast aging society.”