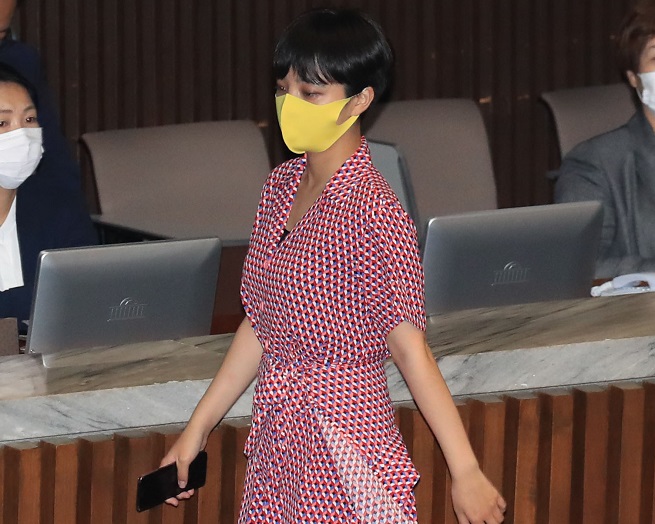 Wearing a red dress, Rep. Ryu Ho-jeong walks down an aisle during the National Assembly’s plenary session on Aug. 4, 2020. (Yonhap)

SEOUL, Aug. 6 (Korea Bizwire) — A red mini dress sported by a young female lawmaker during the latest assembly session is stirring up a heated spat over what is suitable for female lawmakers to wear on duty.

Rep. Ryu Ho-jeong of the progressive minor Justice Party drew public attention as photos of her walking down an aisle during a plenary parliamentary session Tuesday in a red wrap dress circulated online.

As online reactions were largely divided on the fashion choice of Ryu, the youngest member of the assembly at age 28, some internet forum users launched misogynistic verbal attacks on the lawmaker.

A member of a pro-government Facebook forum on Wednesday said Ryu looked as if she “came to the main assembly hall to collect payments for alcohol.”

“Some of the criticisms against her carry sexually discriminating prejudices (against women). We express strong regrets,” the Justice Party said in a statement.

In a Facebook post, Rep. Ko Min-jung of the ruling Democratic Party (DP) thanked Ryu for “shattering excessive rigorism and authoritarianism at the National Assembly.”

Ryu herself said the dress was meant to show her determination to fight the male dominance culture in the assembly as represented by the predominant dress code of a suit and a tie.

“In every plenary session, most (lawmakers), male and in their middle age, show up in a suit and a necktie, and I wanted to shatter that tradition,” she told Yonhap News Agency over the phone.

“The authority of the National Assembly is not built upon those suits,” Ryu said, adding that she will wear various other outfits to the assembly.

The latest dress code spat targeting a young female lawmaker came as the current 21st National Assembly has the biggest-ever proportion of women.

Women account for 57 of the assembly’s 300 seats, or 19 percent. The 21st assembly also inaugurated the first-ever female member in its leadership, with Rep. Kim Sang-hee of the DP assuming the first vice speaker seat given to a female lawmaker.

Ryu, who was elected on a proportional representational ticket, is the youngest member of the chamber and the only lawmaker aged below 30.