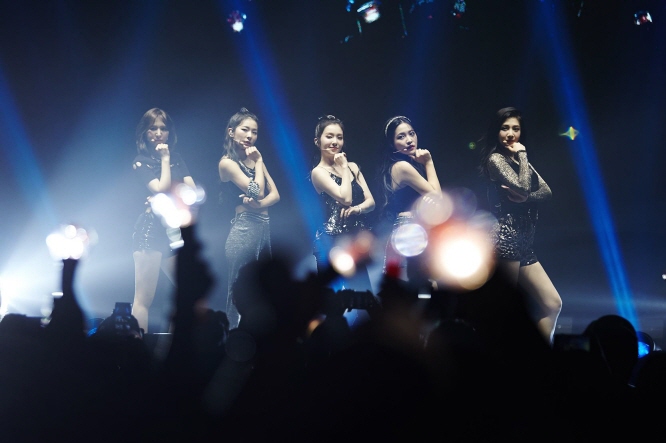 Red Velvet during a concert in Newark. (image: SM Entertainment)

SEOUL, Feb. 19 (Korea Bizwire) — K-pop girl band Red Velvet wrapped up its tour of five American cities and will set out on a tour of Canadian cities, the band’s management agency said Tuesday.

At the last U.S. concert at Newark, the band staged a medley of its hit songs, including “Russian Roulette,” “Happiness,” “Red Flavor,” “Peek-A-Boo,” “Power Up,” “Bad Boy” and “RBB,” the last two numbers performed in English.

American fans reacted enthusiastically, putting up hand-held banners with supporting messages in Korean, according to SM.

Coming out of the U.S. tour, Red Velvet members were quoted by SM Entertainment as saying, “The North American tour was a challenge and a meaningful moment for us.”

“We thank our fans for helping fill (the concerts). We safely wrapped up (the tour) thanks to you.”

The U.S. tour left the band invaluable memories, the band members also said, adding that it will go down in Red Velvet’s history.

Continuing on the concert tour, Red Velvet will perform at Toronto’s Coca-Cola Coliseum on Tuesday (Canada time), the first stop of their Canadian tour, SM noted.