SEOUL, Oct. 4 (Korea Bizwire) — Red Velvet’s Seulgi said Tuesday she feels the time is right for her to make a debut as a soloist after seven years with one of the biggest K-pop girl groups.

Seulgi debuted as a member of the five-piece group in 2014 along with Irene, Wendy, Joy and Yeri, and the group has since released numerous hits, such as “Ice Cream Cake,” “Russian Roulette,” “Red Flavor” and “Dumb Dumb.”

Seulgi has established her status as an all-rounder through various activities not only as a main dancer and a vocalist of Red Velvet but also as a member of the band’s subunit Irene & Seulgi and GOT the beat, a South Korean supergroup formed by SM Entertainment.

The duo Irene & Seulgi released an EP titled “Monster” in 2020, which reached No. 1 on the iTunes top albums chart in 45 regions around the world upon its release.

“I think it’s right to drop my first solo album after getting more experience and better,” she said during an online press conference to promote the album, titled “28 Reasons.”

The press event was held a few hours before the album’s release at 6 p.m. “I feel the time was right for me to begin working as a solo artist in my eighth year in this career.”

She is the third member from the five-piece group to go solo following Joy and Wendy.

Seulgi said she tried to show her various colors as a vocalist, and more aggressive and intense side of herself through the upcoming album. 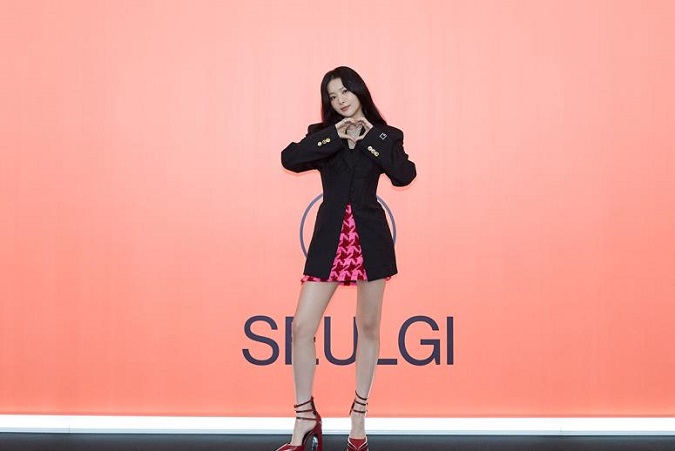 Seulgi of K-pop girl group Red Velvet poses for the camera during an online press conference to promote her solo debut EP, “28 Reasons,” on Oct. 4, 2022, in this photo provided by SM Entertainment.

“28 Reasons” is a pop-dance song with groovy and heavy bass, and whistling sounds as Seulgi sings a character with both good and evil components or with both pure interest in her love interest and mischievousness.

She then throws out a question about numerous reasons surrounding the relationship.

“Dead Man Runnin” is an R&B song carrying a warning to a person who hurt her in the past, and her hollow and precarious mind after being hurt.

It is also the first time that Seulgi has written the lyrics for a song. “Bad Boy, Sad Girl” presents fresh chemistry between Seulgi’s laidback vocals and sensitive rapping by BE’O.

Seulgi said she chose “28 Reasons” as the lead track because she thought it can best represent her as an all-rounder on stage.

“I hope fans can see a more advanced side of Seulgi through this song,” she added.