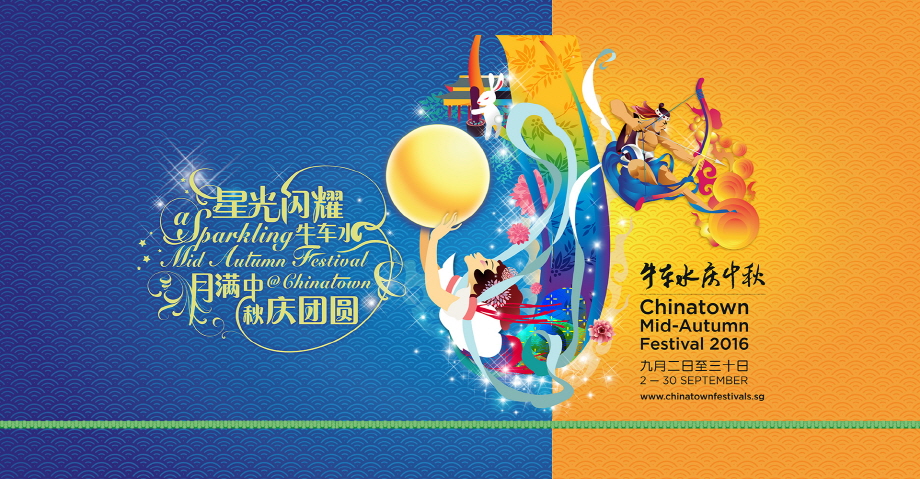 SINGAPORE, Aug. 31 (Korea Bizwire) - An annual affair not to be missed, the Chinatown Mid-Autumn Festival returns this year with a retelling of the most traditional folklore behind the festival to let visitors, and especially our younger generation, to rediscover its origins and history.

During the month-long celebrations from 2 to 30 September 2016, locals and overseas visitors to Chinatown will not only be able to admire the impressive lantern display that brings to life the traditional folklore of Chang’e and Hou Yi, the legend will also be told through spectacular stage performances such as acrobatic acts and dances, combined with special lighting and high-tech visual effects, at the Official Light-Up and Opening Ceremony on 3 September 2016. The opening ceremony will be graced by Guest-of-Honour, Mr Teo Chee Hean, Deputy Prime Minister and Coordinating Minister for National Security.

Visitors can also learn about the meaning and heritage behind the Mid-Autumn Festival through the line-up of special programmes and activities such as the Heritage Walking Trail and Mass Lantern Walk.

This Mid-Autumn Festival also marks the very first time that the streets of Chinatown will be lit up with LED light lanterns, employed by organiser, Kreta Ayer-Kim Seng Citizens’ Consultative Committee (KA-KS CCC) to make the Street Light-Up more environmentally-friendly. About 900 lanterns have been fitted with LED lights, which will help to reduce the total amount of electricity used by up to 70%. The LED lights, which also shine brighter, will enhance the overall visual effect of the street decorations for the annual festival, themed “A Sparkling Mid-Autumn Festival @ Chinatown”.

To keep the conversation going with the younger generation, KA-KS CCC will be organising the first-ever Chinatown Mid-Autumn Festival Learning Journey for 200 students aged 16 and below from Jalan Besar GRC. During this special tour, they will get to learn more about the festival’s history as well as the rich heritage of Chinatown.

Dr Lily Neo, Adviser to Jalan Besar GRC GRO (KRETA AYER – KIM SENG) said: “The Chinatown Festivals play an important role in keeping the cultural traditions and heritage of Chinese festivals alive. This year places emphasis on rediscovering the origins and history of the Mid-Autumn Festival by retelling the traditional story behind the occasion, which today’s generation, especially the younger audience, may have forgotten or lost touch with. From the Street Light-Up to various activities, we are delighted to be able to use this platform to meaningfully engage Singaporeans and tourists alike in the festivities and nurture an appreciation of Chinese cultural heritage.”

“We are pleased that the Mid-Autumn Festival has been delighting Singaporeans and visitors alike in the past 17 years, as it brings to life the fascinating heritage and character of Chinatown with lanterns and festivities. For the 2016 Festival, we hope to create more memorable moments for visitors to Chinatown with the Learning Journey, which showcases the history and story of Chinatown, and the complimentary Heritage Walking Trail guided tours,” said Mr Kenneth Lim, Director, Cultural Precincts Development, Singapore Tourism Board.

About 900 handcrafted lanterns will paint the skies in a myriad of colours in the highly-anticipated Street Light-Up. Inspired by the traditional Mid-Autumn folklore, the various lantern displays depict scenes of Hou Yi shooting down the nine suns but one, Chang’e ascending to the moon and the Jade Rabbit pounding the elixir of life using a pestle as it accompanies Chang’e at the Moon Palace.

Fitted with LED lights, this marks the very first time that the streets of Chinatown will be lit with LED light lanterns in a move to be more environmentally-friendly. The brighter LED lights will also enhance the overall visual effect, dazzling onlookers. Stretching from Eu Tong Sen Street and New Bridge Road to South Bridge Road, this year’s Street Light-Up includes a 12-metre tall Chang’e sculptured lantern as the centerpiece, and was conceptualised and designed in collaboration with eight Year Two students from the Nanyang Academy of Fine Arts (NAFA). Working with expert lantern craftsmen from China, the partnership is one of the ways KA-KS CCC engages the youth in its cultural festivals.

“It was an enriching experience for us. Besides being able to put what we learnt in school to good use, this collaboration with the organisers provided an opportunity for us to research and learn about the classic tale of Chang’e and Hou Yi. After the master craftsmen gave us first-hand insight to how the design is applied to the materials used to bring about the final outcome, we applied programming tools to further tweak our designs to fit the needs of the project and medium. We are happy to be able to bring the traditional folk tale to life through our designs, and we hope that our work will act as a bridge to tell the origin and symbolism of the Mid-Autumn Festival, especially to our peers”, says Chua Jia Hong, 19, who is studying for a Diploma in Design (Landscape and Architecture) in NAFA.

This year, KA-KS CCC will be organising the first-ever Chinatown Mid-Autumn Festival Learning Journey for primary and secondary school students from local and international schools in Singapore. About 200 students are expected to join the learning journey, where they get to visit Chinatown to learn about the festival as well the precinct’s history from volunteer guides. They will also be making a stop at the Chinatown Heritage Centre to visit its galleries and enjoy the series of Mid-Autumn festivities taking place there.

Presented by KA-KS CCC and Chinatown Heritage Centre, “Celebrating the Moon @ Chinatown Heritage Centre” is a series of Mid-Autumn festivities highlighting traditional stories, customs, childhood joys and memories related to the festival. It brings traditions back with a fun twist with interactive activities to engage both young and old, such as guessing lantern riddles (a traditional activity often played during the Mid-Autumn Festival) in English and Chinese, a photo booth with Mid-Autumn themed photo props and greetings, including handcrafted lanterns from this year’s Street Light-Up, for visitors to take home memorable snaps, and old-school games like Tikam Tikam with festive goodies and retro games to be won. The Mid-Autumn Festival is also a time for people to make wishes and visitors can pen their festive wishes at the Chinatown Heritage Centre. There will also be tea appreciation workshops on 17 & 18 September for the public to take part in. The exhibition will be on display from 3 to 22 September. (Please refer to Annex I Key Events for registration details)

A line-up of exciting festive activities awaits both young and old. Besides the lantern display decorating the streets of Chinatown, visitors can also admire the creative artworks of 430 children and students who took part in the Lantern Painting Competition, an annual pre-opening ceremony event on 28 August 2016. The public can view these beautiful lanterns on display at Pagoda Street from 3 to 15 September 2016.

Take a trip down memory lane on the Heritage Walking Trail, a special complimentary guided tour on 4, 10 and 11 September led by friendly volunteers as participants explore the historical Chinatown precinct and learn about the rich Chinese heritage. Or soak in the sights and sounds of the Mid-Autumn Festival at the ever-buzzing Mid-Autumn Festival Festive Bazaar, where visitors can satisfy their shopping needs with the wide variety of traditional and modern mooncakes, decorative ornaments and more on offer.

For a dose of cultural entertainment, the Nightly Stage Shows at Kreta Ayer Square will have talented local entertainers and performing troupes from China wowing visitors with lively cultural songs, music and dance performances.

The Chinatown Mid-Autumn Festival will culminate with the Mass Lantern Walk on 11 September 2016, as the streets of Chinatown will be further lit up by lanterns of all shapes and sizes as an expected 3,000 participants take part in this annual activity. Take a leisurely stroll while eating to your heart’s content as local food trucks and push carts sell a delectable menu of yummy goodies. There will also be live performances along the 1.2 km route, featuring local lion and dragon dance troupes, dancers and artistes.

For more information, please visit us at: