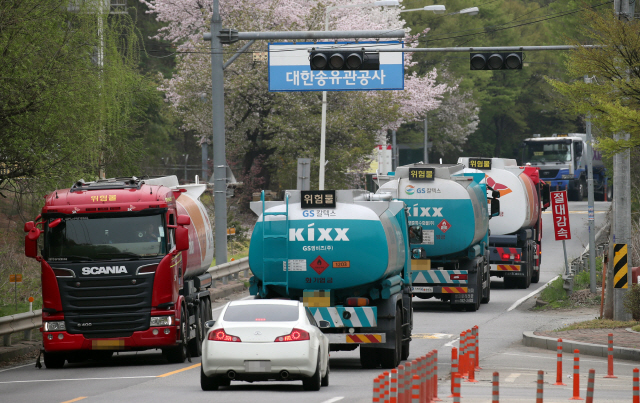 Rep. Park Hong-keun, floor leader of the main opposition Democratic Party (DP), said that he would ask the petroleum refinery industry to alleviate the burden arising from sky-high gas prices.

Rep. Kim Sung-hwan, who chairs the DP’s policy planning committee, also said that he would come up with measures to minimize refiners’ excessive profits or limit their profits by forcing them to donate funds.

Rep. Kweon Seong-dong, floor leader of the ruling People Power Party, also openly called for oil refiners to share the pain, adding that they should not try to take advantage of the high oil price situation.

In reality, the nation’s four major oil refiners — SK Innovation Co., GS Caltex Corp., S-Oil Corp. and Hyundai Oilbank Corp. — logged a combined operating income of 4.76 trillion won (US$3.68 billion) in the first quarter of this year, up 2.5 trillion won from a year ago.

The companies, however, claimed that about 40 percent of the profits are inventory profits created by the hike in oil prices, stressing that they are nothing but ‘profits on accounting records’ that would turn into inventory losses if oil prices take a downturn.

It was also pointed out that the windfall profit tax violates the principle of tax fairness. In 2020, when the pandemic resulted in a drastic decline in oil demand worldwide, oil refiners suffered an annual loss of about 5 trillion won.

When they suffered this considerable loss, the government did not provide financial support or compensation for losses. Taking this into account, some say that it’s not fair to levy higher taxes on high temporary profits, adding that it’s also against market principles.